New Orleans     We left LSU’s Cook Center with 2 filled tour buses for the trip to New Orleans. Planners, architects, sociologists, developers, and a number of New Orleans evacuees all plopped into the seats filled with expectations. But even before we crossed into the parish after listening to everyone’s story on the bus, we knew this was going to be a different day for all of us. And, it was.

We drove from our office on Elysian Fields to the Lake and then over to Franklin and through the neighborhoods of Gentilly. From there we went to New Orleans East across Chef Menteur. We squeezed the giant buses down small streets and drove slowly. Now and then one of the members would shout in the bus that we were passing their own home. We even went by the bus driver’s house in the East and heard his story. From there we drove to the Lower 9th Ward.

Everything was the same even 9 weeks after the storm. The watermarks were still on the houses. The streets were all quiet except for the odd FEMA contractor or garbage truck. Quiet and dust. Everywhere! In many of these areas there was still mud caked under the sun like a river bed, where water had finally dried and left its marks.

We all got off the bus in the Lower 9th Ward on the block where so many ACORN members used to live that it seemed brightened by all of the “No Bulldozing” signs that ACORN had placed on members’ houses at their insistence. This was the block where Mrs. Annie Falls, an ACORN leader and stalwart lived. She had given the tour permission to enter her house and see the full extend of the devastation. From the outside it sill looked like the house she would have remembered. Walking into the living room was heartbreak, knowing Mrs. Falls. Darkened mold everywhere amidst furniture pushed and pulled in every direction. A picture album was open, drying on the porch.

The conference will have a lot of work to do. The power of this trip lay in the pure scale of the damage. It did not look impossible to rebuild. Quite the contrary! But it looked like a mammoth job that no one has quite been able to measure and where most have not stepped up to the task.

Miles and miles and miles of damage over hundreds and thousands of acres of home, where after a while the most surprising things were how much it all looked the same, and how little seemed to be happening.

Articles today on the tour ran in both the Times Picayune and the Baton Rouge Advocate.

A group of urban planners, professors, architects and housing specialists from around the country who toured New Orleans on Monday knew what to expect. They had seen images and read stories of devastation, and they were fully prepared to see it.

But they didn’t expect so much of it.

“It’s unbelievable,” said David Conrath, dean of Louisiana State University’s College of Art and Design. “It’s hard to put in any frame you can understand.” Conrath, who was visiting the city for the first time since Hurricane Katrina, said the closest comparison he could think of was the ruination of cities after World War II.

“I was just blown away by miles and miles of this,” said Chester Hartman, stretching his arms toward the desolation on the 9th Ward street where he stood.

Hartman, research director of the Poverty and Race Research Action Council in Washington, was one of several planners who toured the city as part of a two-day conference to develop rebuilding plans for New Orleans.

The community forum organized by Louisiana ACORN, or Association of Community Organizations for Reform Now, began Monday night after the tour and continues today in Baton Rouge. It was created to address the needs of the city’s low- and moderate-income residents.

“Most places you look at a pile of rubble like that and you say, ‘Darn.’ Here we say, ‘Yeah. Somebody’s doing something,’ ” she told the group. She also tried to counter misconceptions about the city, explaining that eastern New Orleans is not “all poor neighborhoods” but contains a mix of incomes.

One of the drivers, Eddie Epps, drove his bus past his house on Branch Drive in eastern New Orleans and told the group that when he first returned, a real estate speculator offered him $65,000 for his flood-damaged home.

Epps, who is staying with his family in Baton Rouge, said he intends to gut the house and rebuild once his insurance claims are settled. “I’ve got to get back to New Orleans,” he said. “I was born and raised there.”

Tour participants said they heard similar stories from several displaced residents and they were shocked by how much of the city is uninhabited.
“It seems like we were driving forever, and there was no one there,” said Majora Carter, executive director of Sustainable South Bronx, a community organization dedicated to sustainable developments in the New York borough.

“If you’re talking about rebuilding, the first thing you’ve got to have is people and they’re just not there. It’s mind-boggling,” Carter said, noting that entire communities had been dispersed and were unable to return.

Some residents, such as ACORN member Tanya Harris, are still prevented from returning. As the bus passed the restricted-access section of the Lower 9th Ward that Harris called home, she told the group, “We have no idea, no concrete reason why we’re not allowed back there.”

Noting that Britain’s Prince Charles had been allowed to visit the area last week, Butler said, “I guess if you’re royalty from England, you can go somewhere where there’s imminent danger of collapse, but if you’re a homeowner, you can’t.”

The tour group stopped to visit a damaged house on Pauline Street that belongs to an ACORN member. Despite what he called “overwhelming” devastation, Cornell University professor Kenneth Reardon said he believes “a substantial portion of existing housing is salvageable” in the city.

Reardon, chairman of Cornell’s department of city and regional planning, said he hopes ACORN can help create a process that lets displaced residents play a role in deciding the future of their community.

As a result of today’s conference, ACORN will form a rebuilding alliance that will seek to: “frame a vision for rebuilding that serves the interests of all residents; develop specific plans and proposals that are technically informed and resident-led; send a message that resident voices must be consistently heard by city, state, and federal officials as key decisions are made in the months and years ahead.”

The two-day event will be broadcast on the Internet. For information about the Webcast, contact Jeff Karlson at acorn@acorn.org or (225) 925-5558. Or visit www.acorn.org for details.

With an eye on forcing city leaders to include low- to moderate-income residents in the rebuilding of New Orleans, the housing advocacy group, ACORN, opened a two-day forum to sketch out a plan for some of the endangered predominantly black neighborhoods.
“We’ve seen the governor’s commission and the mayor’s commission, and we’ve seen the omission of low-to-moderate income groups,” ACORN organizer Stephen Bradberry said Monday evening.

The ACORN forum, held Monday night and today at LSU’s Lod Cook Alumni Center in Baton Rouge, was preceded by a bus tour of some of New Orleans’ hardest hit neighborhoods.

“So we decided to bring together experts to sit down with residents of New Orleans and speak with people about, ‘How do we envision New Orleans for ourselves?’ “

ACORN is a national organization with about 9,000 members in its New Orleans chapter.

It primarily represents the Lower 9th Ward neighborhood, which has also been locked in a decades-long struggle with the U.S. Army Corps of Engineers. The corps wants to widen the Industrial Canal that separates the neighborhood from the rest of the city.

During Hurricane Katrina, a breach in the canal reduced nearby houses to matchsticks and lifted others from their foundations. A barge ended up in the neighborhood.

The levee has been patched, but residents have not been allowed back into their homes to start cleaning up and drying out their properties. Police barricades block every roadway.

“Our sense is that the Army Corps of Engineers wants that part of the 9th Ward, and that’s why they’re not letting us back (in),” said Beth Butler, a member of ACORN. “That’s also where the barge went through and damaged two houses.”

Part of the barge was visible as the bus approached the St. Claude Avenue Bridge.

“They’ve been trying to move those levees back for years,” said Beverly Collins, a 9th Ward resident who worked for the Corps of Engineers for 13 years.

Why Orleans Parish suffered three separate levee breaches is under debate. Some residents and public officials, including Mayor C. Ray Nagin, have suggested a hole or two may have been caused by forces more nefarious than Mother Nature.

Residents could not return for weeks to pull out dry wall, open windows and start drying out their homes.

“Three weeks ago we cleaned out our freezer of meat. Water reached the attic and then stayed at about 5 feet for three weeks,” said Eddie Epps, who is living in a Baton Rouge apartment. “I’ve got to get back to New Orleans. I’m coming back as soon as my homeowners’ (insurance) comes through.”

Epps added, “No offense to people who live in Baton Rouge, ya’ll have been good to me for the past three months.”

When Epps was cleaning out his house, he said he was approached by a land developer who offered him $70,000 as is. “To me they were like vultures,” he said.

Meanwhile, those who are living in Federal Emergency Management Agency trailer parks or other cities, say they feel like overstaying guests.
“Some of the hospitality is wearing down in Houston,” Dorothy Stukes said. “People are scattered all over. In New Orleans, we’re sharing people. If you’re making red beans and rice, you could always borrow some sugar from your neighbor.”

“In Texas, they’re complaining that Louisiana is taking all the jobs away from people,” said Trina Daniels, who is living in an apartment in north Dallas.

“We all worked. You know, some of us applied for food stamps for the first time in our lives,” she said.

Many residents on the bus stayed in the Superdome and the Ernest N. Morial Convention Center.

Daniels, for instance, drove to the Superdome before the storm.

Things were OK until the waters started to rise, she said. Conditions quickly deteriorated. Eventually, the water in the restrooms shut off and the lights died. People relieved themselves in the hallways.

Daniels said she spent 16 hours outside on the ramp waiting for a bus to take them through the flooded city. Her daughter and grandparents became separated in line. All the buses were going to Houston, she was told.

“But when we got on the bus, it was a different story,” Daniels said.

A week passed before she spoke to her daughter.

Daniels wants to return home and Beulah LaBostrie is ready to help her.

ACORN, the Association of Community Organizations for Reform Now, is pushing a non-bulldoze policy for these areas — some of which will likely require demolition based on the outward deterioration of some structures.

“They need to go,” said Pat Robinson as the bus pulled into a particularly bad spot in the 9th Ward. “I’m sorry. What kind of water were they in?”
“If you were ever going to live in the 9th Ward, now is the time,” said Francis Collins, who is living in the FEMA trailer park in Baker. “I wouldn’t sell. If it’s caved in, bulldoze it. If not, I wouldn’t bulldoze.” 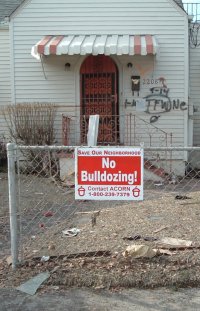 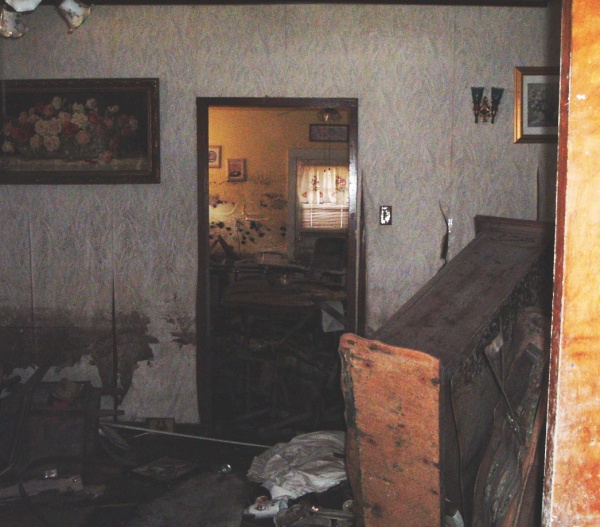 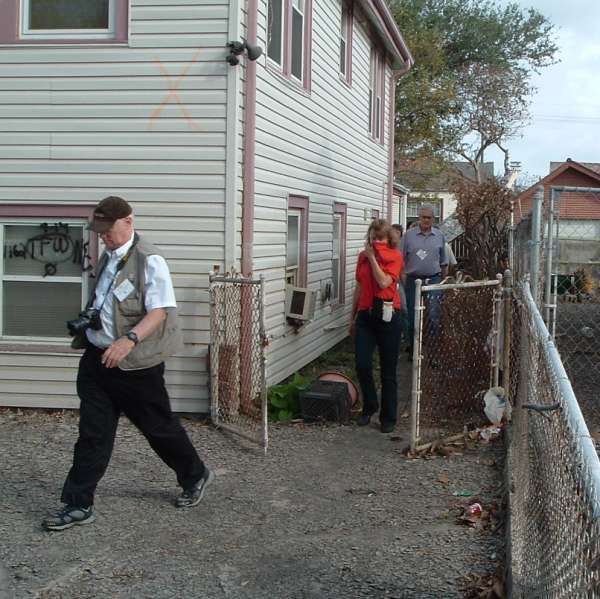 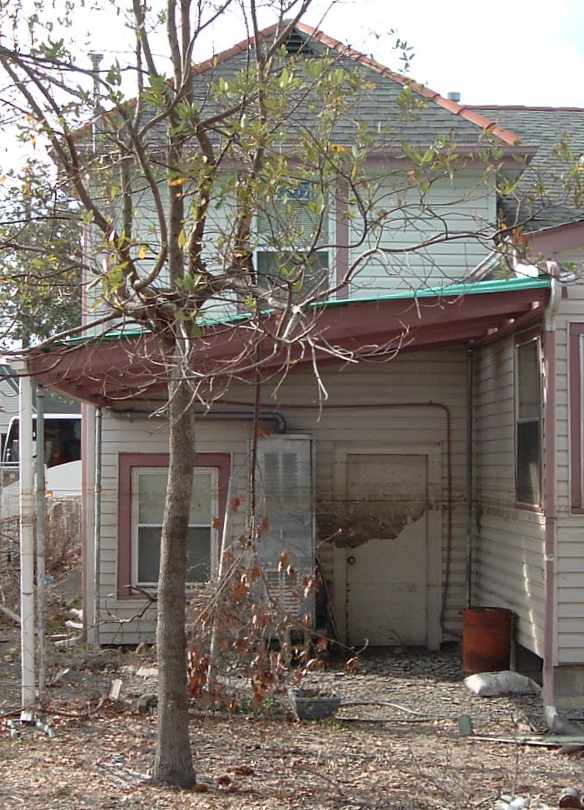