Baton Rouge     The session opened with welcome and good manners from the ACORN leaders from New Orleans. Each one said where they lived in New Orleans, identifying their wards and their homes, and then said where they lived now in Baton Rouge, Kenner, New Iberia, Dallas, Little Rock, or Houston. There was good heart to the greetings, but the anger came out quickly as people shared their questions and concerns.

Dr. Silas Lee, the premier political pollster in New Orleans based at Xavier before and near DC now, was one of the keynote speakers. It was riveting for the audience of experts and evacuees to hear what New Orleans really was, as opposed to what they might have imagined.

We were not any more poorly educated in terms of college degrees and high school graduation, according to Dr. Lee, than what is found in any large city. This was a surprise for many, given the ghettoized job market created by the hospitality industry.

We were just poorer because of that industry. And, we were not universally poorer, we were racially poorer. White New Orleanians had averaged over $40,000 a year per person in income, while black New Orleanians were almost 1/3rd that figure. The income disparity drove the problem. Only 35% of African Americans did not own automobiles for example, which contributed to the disaster of the Superdome and Convention Center and the malfeasant response of city officials.

Dr. Lee’s remarks along with the policy listing from Angela Glover Blackwell of Policy Links set the stage for hearing more clearly Dorothy Stucks, an ACORN leader now living in Houston, who has been spearheading the ACORN Katrina Survivors Association. She spoke powerfully of the demands of the evacuees: the right to return, assistance with housing, jobs that will pay, and other critical issues. Stucks voice quivered between raging and weeping in a way that moved everyone.

The webcast was an important addition to the conference. As always with technology there was the usual excitement as the servers delayed in pulling the web streaming on line. It made a huge difference to have thousands of people able to watch from hotels and churches and their homes at the click of a computer. There is some schizophrenia that will require adaptation. Meetings are so used to being only about the people in the room, that it is hard for them to absorb and adjust to the fact that thousands are peering at screens and wondering why the room is still filling and the program is not starting, just like TV and right on time.

Luckily, the webcast for the whole conference will be archived on the ACORN website at www.acorn.org and we may produce a CD, if it is practical, to allow a lot of others to learn from the proceedings.

Another post-Katrina learning experience we are being forced to absorb, like so many others. 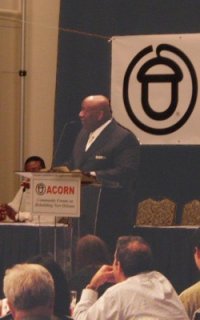