Baton Rouge     The highlight tapes for the ACORN Community Forum on Rebuilding New Orleans would have Dorothy Stukes giving the survivors platform, Beulah Laboistrie’s closing remarks, walking into Annie Falls’ house in the 9th Ward, one of the members standing up to the architects and volunteering his house for the raising and reconstruction, and a dozen other things. It would also have big parts of three different workshops in addition to the dialogue between the evacuees and experts: something on the levees, the emerging plans for rebuilding housing, and some real notes on how to create jobs and make work pay. [All of this is archived on the acorn website www.acorn.org and available to anyone who clicks into the site!]

The LSU engineers walked us through slides on the levee breaks that they had made within days and weeks of the storm. Both of them interestingly were from India originally, and one understood brain drain, because they were on the money here! One said it all when after showing the engineering breakdown, he indicated that it was a situation in which “everything that could go wrong — went wrong.” There was no question in their minds that it could all be fixed and built the right way, but clearly that had not happened before, and needed to happen now. The professor running the hazardous materials center at LSU was equally clear that it was safe to come into New Orleans and that it was simply not as bad as feared, because the vast amount of water had diluted the hazards — a classic bad news, good news situation. The engineers shrug at politics and costs, since that is not the technical problem which can be solved. The hazardous professor while welcoming people back home, cautioned that 10-20 years from now he could not predict the long term impacts to health from the storm.

On housing some of the panel members, especially Peter Werwath from Enterprise and Mike Shea from ACORN Housing Corporation, went into specifics of what it would take to rebuild. Werwath sketched out the costs to existing FEMA budgets to immediately tarp the roof problems and begin massive internal cleanup. At the end of his notes $10 billion seemed like a bargain to save the housing stock, if one moved now. It was hard not to agree that we were suffering most now from a lack of leadership since plans were so readily available. [Peter Drier from Occidental handed me a sheet as he left with a $7.5 billion price tag, which seemed even cheaper!] Mike Shea took us to the specifics as he detailed the ACORN experience with prime and sub-mortgage companies and what it was going to take to move financing to the area.

Joel Rogers from the University of Wisconsin (Madison) along with Mukesh Kumar from Jackson State and Amy Liu from Brookings laid out some vision and specifics on how one would rebuild the city’s economic base without simply recreating the hospitality ghetto. Start with the water was the mantra. Look from the strength of the port and the River and move forward from there. Some excellent ideas emerged from this session.

It was a start, not a finish. It was an important dialogue that filled one with more promise than despair, as we listened. Things could be done — too many of them! — and there were people who wanted to help do them. The devil is in the details and we have to move fast, but one could see that ACORN would have help and partners in the project, and that was a gift of the conference. 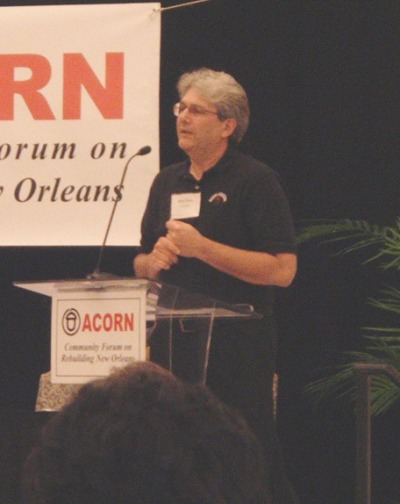