New Orleans     Max Allison, the political genius behind the almost forgotten, but still legendary, Congressman Wilbur Mills from Arkansas, used to talk about following “the equation.” The way that inputs of various kinds fit into the political calculus of running and winning.

I found Bob Tucker, an equally legendary political operator in New Orleans, yesterday in his office on the deserted Central Business District on the 27th floor of the Energy Building. It was different down there. The building is right across from the Hyatt, which operated as the nerve center for city government during the storm. Now cars were parked in the middle of the street by office workers leaving at 5:30 pm as I walked into the building. An informal city had become strictly casual.

After the usual sharing of disaster stories, we started to work out the math for the upcoming mayor’s race in New Orleans. The numbers are very simple for a city that had 485,000 people and more than 100,000 registered voters.

If one accepted that now there were 60-70000 people living in the city, then at best perhaps there were 20,000 of them who were registered voters. If there was a swelling turnout of 15,000 of them for 75% participation, that would be outstanding. A race run in what was once the four corners of the city between Algiers and the West Bank and the splinters of land along the river moving uptown, in the French Quarter, and towards Bywater, then the effort would be to turn those votes your way.

The population was now whiter than it had been in 50 years or more, so not surprisingly there were a lot of white politicians who were surfacing their names to take a groundhog look at whether it was winter out there. With favorite “son”candidates from the West Bank and this and that the vote would be split unless a candidate like Lt. Governor Mitch Landrieu entered the race for Mayor and galvanized a bulk of the white vote. He had the name that would compete with Mayor Ray Nagin and any other candidate. Nagin has the bankroll, but it only works in a 4-cornered race.

But, the math also meant that with work the race would be in the absentee ballot boxes. Anyone who could get to and mobilize absentee voters and could hit 15000 or more ballots cast could push into the runoff and maybe win outright. Such a strategy could favor anyone and anything that had an extensive national network and field operation.

This might be something, as Max used to say, that some people were overlooking in the equation. 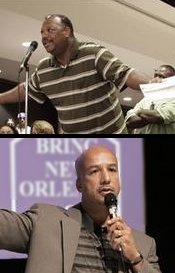