Vancouver      Snow was falling as I hit Vancouver. That’s rare in this coastal city. The federal government had fallen as well. That’s more common.

Roy MacGregor, a columnist in the Globe and Mall, told a story about Ken Duff in Ottawa Centre, who upon hearing the news posted a sign on his property saying the following:

“No politicians have convinced us that they are prepared to act in the best interest of Canadians and are only concerned about getting elected or re-elected.”

“We have no interest in hearing from you.”

“Please deposit any material in the box provided below but DO NOT bother us further by knocking on our door or attempting to communicate further with us.”

“You should be ashamed of yourselves.”

The last election had not been so long ago — less than 2 years — and polls indicated that the outcome of this contest was likely to end in the same finish as before, restoring the Liberals to power with the Conservatives somewhat behind and the New Democrats farther behind, and so forth, which would once again construct a coalition minority government. Nonetheless, there was a certain logic and charm to it all as seen by this traveler passing through town from one meeting to another.

Forcing the government to fall brought a real meaning to the “threat of exit” and put solid power in the punch of protest which is only possible for a minority party signaling to the majority and other coalition partners that enough is enough and too much means that there has to be a “do over,” even if the outcome might restore everyone back to their original position in line. John Young, ACORN Canada’s Executive Director, tossed out an estimate to me that the price of the election campaign was likely to run in the neighborhood of $300,000,000 CN. That’s what we call a bought lesson.

Watching the increasingly interesting parliamentary shenanigans by the Democrats in the US Congress as they try — late in the game — to get some debate on the Iraq war by forcing closed door sessions on the war and halts to other business, makes one wish that in certain circumstances one could simply get the politicians to move over and let the people speak. The Duff’s may have decided to sit this one out in Canada, but they had a choice and could have gone another direction.

The Canadian government is falling around the issues of corruption in campaign financing around an intriguing scheme to set up an off budget slush fund around the politics of Quebec separatism some years ago. In the United States Republican Majority leader Tom Delay can be indicted for high chicanery in fundraising for the party and Republican Congressman Duke Livingston from San Diego can confess to taking $2 million in bribes from military contractors and we can pretend its personal, rather than a political crisis.

Wouldn’t we all love to have a way to bring Humpty Dumpty down and all the Kings men along with him? 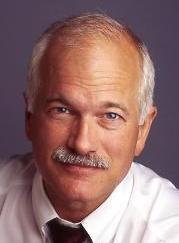 Jack Layton of the National Democratic Party, one of the party leaders vying for power in the upcoming Canadian elections.