St. Louis     St. Louis is not a regular stop on my route. I had last been in town for the 2004 Gameliel Leadership Assembly and was now back with them again for the 2005 edition. Landing late in the night from San Francisco, I almost automatically went to the wrong hotel, and as I marched the several blocks to the “correct” hotel it was a deja vu “memory moment” because though the hotel said Hilton Pavilion on the outside for me it would always be a Marriott. The last time I had been there was several years before at the concluding march of an ACORN Convention. We had been fighting with Marriott and trying to force them to establish a “first source” hiring provision from our neighborhoods. As more than 1000 of us hit the front door of the hotel, all hell broke loose, and it wasn’t long before local uniformed public officials had escorted me to the county calaboose for an extensive personal tour and close inspection.

That time I didn’t get past the lobby. This time I had been invited to address the assembly on the 2nd floor about the aftermath of Katrina. I was happy to do so. The Gameliel organizing staff had proven themselves a classy bunch for folks when despite the hardboiled, cynical demeanor of organizers everywhere, they had personally gone into their pockets after a staff meeting shortly after the storm and pulled out more than $5000 for the ACORN Rebuilding and Recovery Fund. The Gameliel board had matched that amount and sent us a check for some $10,000. I was there to say thank you to them not only for the contribution but also for helping teach me and a lot of ACORN what it really means to be in a partnership and a real community of organizers.

Opening the St. Louis Post Dispatch on page 5 there was an article (Clay Barbour www.stlouisdispatch.com) which detailed the efforts to win first source jobs on highway construction in the area. Reading quickly, it was deja vu all over again, because there was St. Louis ACORN and quotes from John Cross, the political director, demanding a piece of that pie, and right with them were quotes from MCU-UCM, the Gameliel group, also demanding jobs. Clearly, this was a common campaign and an important one, where there was a lot of collaboration that needed to happen, and the gauntlet was down with the state to do right. Lester Woods from MoDOT was in fact conciliatory, promsing that it was “a new day” and that they were “committed to working organizations to ensure work force development.” This campaign looked like more a winner than the long, frustrating fight with Marriott.

Several pages further into the paper was a tragic story, but also another chapter of a long campaign which quoted Dave Clohessy, the national director of SNAP, the Survivors Network of Abuses by Priests. Dave for many years was an ACORN organizer and had been the head organizer of Missouri ACORN at one time, and bought me a cup of coffee and caught me up to date. He and committed band of activists — and victims! — have been as faith based as Gameliel, but have been focused on reforming the practices of the Catholic Church and its employees, especially the rogue priests that have been sheltered too long by the institution. It had been several years ago since we last met and at that point it appeared to be a campaign that could not be lost. The Church was moving to reform and seemed chastened by the price tags of settlements and the horror of the disclosures. It seemed that victory was in their hands. Dave shared how difficult it had turned out to be to finish the campaign, because of the closed culture of the church which seemed to not want to embrace the transparency that would force change in order to shield the hierarchy of the institution. I felt there had to be a breaking point, but Dave — much closer to the reality of this campaign — thought it might still be years to come. Their legislative strategy, first successful in California, of opening up the window of statues of limitations for victims, which is pushing forward in Ohio and New York now, may be a key piece that forces change.

Paul Scully brought me up to date on the joint work of ACORN and Gameliel in New Jersey. I got to spend some time with Rev. Terrance Jacob who had been invaluable to us when the Organizers Forum visited South Africa in 2004 (www.organizersforum.org). It was disappointing to hear how difficult fund development continued to be for the work in Cape Town and Durban. Over oatmeal Greg Galuzzo, who directs the network, briefed me on progress being made and challenges being faced. At the airport I had a chance to thank a program officer from Needmor for the way they had stepped up quickly to support our New Orleans fight as well. It was moving to hear that their board, not just the staff, had wanted to do the right thing here!

I found myself in a funny place on the stage with my power point of Katrina pictures. Talking to assembly about how moved I had been at their contribution, I was darned it I could keep my voice from cracking. Somehow the personal discipline and control that I pride so much had deserted me on the stage with pictures of Annie Fall’s home behind me and a microphone in front of me.

One of the leaders followed me to the stage and brought me back to give another $5000 to ACORN’s Rebuilding Fund with the promise of more, much of it raised by one church in Detroit, which I will have to find a way to thank. Another leader closed with prayer and pulled me into the prayer and the whole assembly prayed for the rebirth and recovery of New Orleans ACORN and its members.

There are some deep lessons here about values. No one can make this stuff up. It’s deep and it’s heavy. There is much that was being built for the future here in St. Louis. 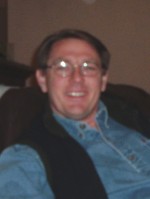 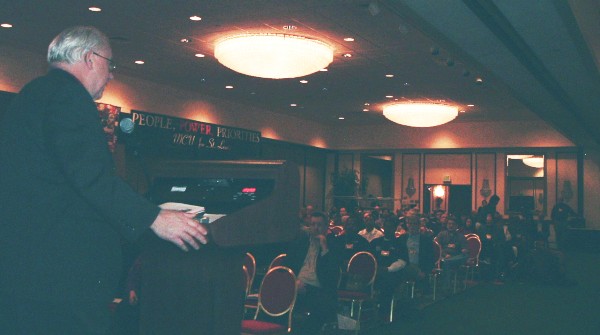