New Orleans       I fly all the time.  I don’t miss planes.  In decades of almost constant travel, I’ve messed up and missed a plane less than a handful of times, and in most cases the situations have been wild and extenuating.  I certainly know how long it takes to get from my office in New Orleans to the airport — to the millisecond.

Catching a plane to DC though near a normal rush hour, I left early figuring it might take me 30-35 minutes to go the 15 miles.  I showed up at the counter 75 minutes later before the flight left, but after the flight was closed.  I had spent all of that time crawling and parking in gridlock in the new New Orleans.

More businesses have indeed opened in the city.  I knew that.

I had not fully reckoned with the number of workers who are now commuting to the city from Baton Rouge on down, because they have no housing in New Orleans.  Intellectually, I knew the facts.  Physically, I had seen the neighborhoods.  Sitting in traffic, missing the last flight to DC one buys the lesson.

This lesson — how much people want to get home — is still lost on Mayor Nagin’s whitewash welcome home committee.  Furthermore, now they want to race each other for who is more macho and can deliver the worst news and the hardest sell to the citizens.

Today, President Bush does a drive-by visit for the 9th time since the waters rose.  Tompaine.com asked me to share some thoughts to set the stage for the President.  They follow below:

Three months ago New Orleans was center stage in a riveting drama created by the hugeness of nature and the smallness of men, the rising of water and the failure of government, the roar of wind and the inescapable sights and sounds of race and class impossible to ignore for the first time since the 1960’s.  Now, as the water receded, so it seems has so many of the homes and dreams of the city and its people.  The rage and heartbreak are piled on every street in giant mounds, mainly waiting for help that still seems increasingly unlikely to ever come.

New Orleans is a war on so many levels, but there is no level where citizens are winning. The war pits low-income residents against developers and politicians who don’t care how New Orleans is rebuilt, just that it happens. Yesterday, Mayor Nagins’ commission revealed key elements of a rebuilding plan that is drawing fire because it recommends that the city should focus on only rebuilding some areas and not others.  The “others” would be the parts of the city where mostly black and low-income residents lived. A plan like this, which relies on market forces to rebuild the city, dooms the future of New Orleans neediest residents.

Today, the president is doing yet another fly-by of the Gulf Coast, something like his ninth visit to this area in the four months since the storm threw its first punch at the city —and then threw the next couple at FEMA and the rest of the president’s posse. Every local elected official, all the ex-mayors and everybody over the age of reason in New Orleans is begging the president to upgrade the levees so that they can handle a Category 5 hurricane. Yet, the president has only begrudgingly offered to give us what is now called “a real 3” down here — levees that are at least well made enough that they could handle a real category 3 hurricane, which was in the range of what Katrina became at landfall.

At 30,000 feet the president is parsing words on recovery, quibbling about the security of the levees, and trying to pretend that what the Corp of Engineers and the federal government broke, they should somehow not have to fix.  If the tragedy of Katrina and New Orleans proved anything, it proved that we have to have good and effective government, putting a lie to the “less is more” rhetoric of recent administrations.  At the same level, Congress is strangling the city by joining with the Bush administration and FEMA to prevent the resources from being appropriated to get the job done.  We in New Orleans are so desperate for resources that we’ll support any measure that promises them. For instance, no matter how good or bad Rep. Richard Baker, R-Baton Rouge, and his recovery funding bill might be for the city, we almost have to have a bill, any kind of bill, in order to finally get started and move forward.   Passage of the $29 billion dollar bill by the Senate lets us listen for a heartbeat, before the last of the machinery grinds to a halt.

Grasping for straws to stuff in the holes in our dikes, many from Governor Blanco, to New Orleans Congressman Bill Jefferson, to Mayor Ray Nagin have proclaimed themselves willing to live with this, largely because it’s the best, last and final offer the President put on the table.  We are still out here crying to ourselves with the water rising it seems.  The President said he would do everything he could.  Not surprisingly, that turns out to be damned little.

When Bush buzzes through the city this time he will find the ground war a little closer to home.  Citizens, especially in flooded areas and among the formally African-American majority, are battling the contradictory voices of a host of committees are advising the Mayor, the Governor, and anyone pretending to listen, and we are losing there as well. Most remarkably, the Mayor’s Committee headed by big-time local developer Joe Canizaro, a Bush pioneer contributor, is the force behind the controversial rebuilding plan. It was Canizaro who engaged the Urban Land Institute to advise the mayor’s commission on how to rebuild the city. The plan basically argues against a citywide effort, but instead recommends graduated stages of rebuilding, which would mean writing off huge neighborhoods and not allowing them to be rebuilt.  The arrogance of the ULI’s recommendations was breathtaking. People like Canizaro, the ULI, and the Committee itself are unelected and unaccountable.  They rejected the idea that homeowners and citizens should have a voice and instead wanted decisions to be made in bulk at the community level, rather than individually.  They argued gratuitously that people should be bought out at “pre-Katrina” prices, knowing cynically that there were not resources to rub two cents together.  This was all a request for fascism by fiat.  If the Mayor endorses such a plan, he doesn’t need to run for election, which is now finally set for April 29th after months of delays.

The battle for New Orleans has now become a guerilla struggle fought block by block and house by house.  The “whitewashers” and ULI promoters have argued now with the support of the New Orleans Times-Picayune, for bad medicine to be swallowed and neighborhoods written off, particularly in the hard hit lower income areas where ACORN members have lived forever.  A report to the Mayor to be issued tomorrow is supposedly going to offer one year to see who comes back and who has saved their houses, and then work forward from that point based on the survival of the fittest versus the devil take the hindmost.  If we can bring enough houses back in ones and twos, in clusters, then we save the communities.  If not, they drown a second time in indifference bred of centuries of blindness that runs deeper than the River in this once mighty city.  Ominous voices are threatening to withhold federal money despite whatever decision is made.  CDBG, normally the province of the poor, is being waved as a hammer over the heads of the communities that housed the poor in yet another bitter paradox.  We realize that without resources or leadership or any kind of plan that allows a voice and the ways and means to move forward, no action, means the developers bulldozers will win.  Our members and hundreds of thousands of people like them will be stuck in the New Orleans Diaspora homeless and unable to return.

This may not be the spin, but this may be part of the message being helicoptered into New Orleans by the President this week.

The ACORN cleanout crews and the volunteers from Cornell, Sarah Lawrence, Purchase, Tulane, and elsewhere every day are finding, even in the hardest hit areas, that there are significant numbers of houses that are structurally sound and recoverable at affordable prices.  For every house saved in these critically impacted areas, the wrecking ball is postponed and the bulldozers are silenced.

The ACORN Cleanout and Demonstration project is trying to prove that one can find and save houses.  The more houses, the more blocks, added one by one, five by five, ten by ten, the more there is a chance of putting the lie to the claims of the developers and the smaller, richer, whiter city, “just for me” advocates of rebuilding New Orleans not as it was, but as a tourist playground, a Disneyland along the River, and establishing that the city can — and should — be rebuilt as a holistic city built on the strength of its people, its culture, and their communities.

But, things don’t change without lots of work, and, yes, care, even in this City that Care Forgot.  Forty percent of the city is still cloaked in darkness without power.  We reopened our national headquarters a week ago, but from our office we can drive five miles on Elysian Fields to Lake Pontchartrain before we find a neighborhood that works.

The President stood in Jackson Square and promised it would not be this way.  But, it is.

We just need an even chance.  Finally!  It’s house to house fighting now, and we need help fighting shoulder to shoulder in the streets with us now!  We need the chance to rebuild our city.  Now that the storm has passed, we finally need the recovery to begin. 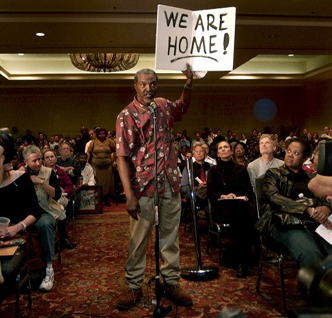 Ninth Ward resident Calvin Alexander making his point at the BNOB presentation which laid out the rebuilding plan for the new New Orleans.