Washington          Sometimes it is the little things that make a difference, and so it seemed on Thursday morning as Mary Howard, a long-time Louisiana member, dominated the front-page of the Washington Post with her red t-shirt and a phalanx of members marching behind her as the ACORN members from Katrina came from the Capitol to the Cannon office building.  The story jumped inside with another picture, but the buzz everywhere was the front page.

The picture had been prelude to the meeting with the Small Business Administration, who seemed clueless in general.  The aftermath of the picture made the ACORN delegation hard to avoid on Thursday.  An outdoors rally in the shadow of the Capital addressed by Senator Harry Reid (D-NV), the Democratic Minority leader, along with Louisiana Senator Mary Landrieu and New York Senator Hillary Clinton, was covered with cameras.  A separate stage at the other end of the rally had 8-10 cameras from various channels rolling film with radio and TV walking through the crowd.  I saw a camera from the UK.  The Times-Picayune even finally sent a reporter, who was dutifully working the crowd.  ACORN was quickly on BBC radio news with a report.  Walking along the rally’s edge, while Senator Clinton spoke, there was a separate scrum of reporters interviewing another score of members behind the stage while all of this was going forward, so maybe in some small way real voices were finally being held.

The day featured meetings with HUD, meetings with President Bush’s recovery team, individual meetings and door-to-door activity with all of the elected members of Congress, along with other side meetings and special features.  Members exhausted felt once again that they were pushing water against the tide, but were satisfied that they were doing their best and doing what had to be done.

More will be clear as the buses finally make it through the night and the debriefing and plans for the next steps are made. 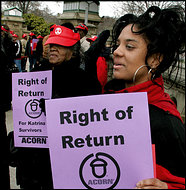 Chantel Young, right, whose home was damaged by Hurricane Katrina, and Gloria Calhoun, whose home was destroyed, march in support of rebuilding efforts on the Gulf Coast.
Sen. Hillary Clinton speaking to the ACORN Katrina Survivors with Sen. Landrieu and John Sweeney of the AFL-CIO. 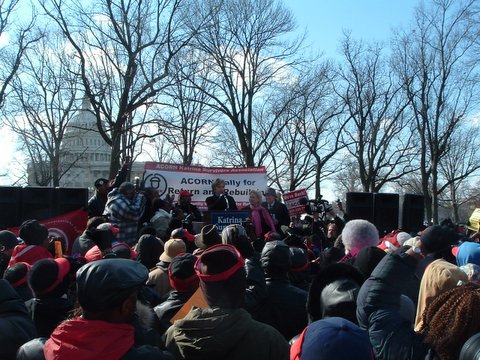