New Orleans     Living in New Orleans one becomes myopic perhaps?  Day to day one counts small, sometimes very small, things as great progress:  a store opens, houses cleaned, a stoplight working, or a streetlight coming on.   Perhaps we are counting trees and are lost to the forest?

It was impossible for me to say “no” to grabbing a seat and helping narrate four vans full of SEIU leaders along with Rosa Hines from SEIU Local 100, Steve Bradberry of New Orleans ACORN, and others when they wanted to go to really see the now famous Lower 9th Ward, especially after having asked Tanya Harris and her mother and grandmother to meet them there and show them their houses in the very far northern corner of the lower 9th hard on the border between Orleans and St. Bernard Parish.

Crossing the large bridge over the Industrial Canal, the van driver slowed down so that people could look at the work being done by giant canes inserting steel “backbones” into the levee breaches.  We drove around the potholes and piles of rubble that had been homes and lives.  We saw where the barge had finished its journey into the neighborhood and then been dismantled.  It was hard to explain 8 months on the difference between piles of haphazard trash that meant “clean-up,” rather than the equally random debris that still spoke to the storm.

Block after block without street signs and in a numbing sameness of houses leaning, crushed, or crumpled hither and yon, cars in grotesque shapes and sorts under and around what was trees and streets, made all of us lost.  As guides we lost our bearings, and it more than once thought of abandoning the search of the slip of a street near Dorgenois that the Harris family called home.  We were not as lost as the passengers though who were muted in silence at the scenes.

Tanya is now an organizer with New Orleans ACORN.  She stood in the driveway and tried to let the gaggle of SEIU big-whoops see through her eyes at the progress and hope she felt possible in the neighborhood, even as one could tell it was hard for them to understand why there was no water yet and not much else.  The family led people through her sister’s house which had been cleaned to the studs and floors.  She told the story of how hard it was for her sister to get someone to handle the mold abatement in the house who could truck their own water onto the site.

Speaking from the trenches, one felt one could see the enemy as almost personal and the progress felt palpable.  Later though as SEIU leaders talked, many in anger, one heard more clearly the disappointment that they felt seeing so little changed after 8 months.

Andy Stern, International President of SEIU, spoke of shame.  The shame of being an American unable to explain why the mail doesn’t work in New Orleans yet and why there was so little activity in the lower 9th.   Where were the trucks and clean-up crews?  Where was the bustle of activity in the neighborhood?

Having been there before does not mesh with a reality of expectation different than hope, since despite the fact that the lower 9th was cleaner and more alive, Andy was also right.  None of us could really explain why there wasn’t more, other than that this was all that we could win and the best that we had been able to do.

How does one really say that on the dark side of America, it really is very, very dark and lonely, and that one really does not curse the light, but in fact mainly we try to develop a vision that allows us to work and walk by whatever stars sparkle in this night? 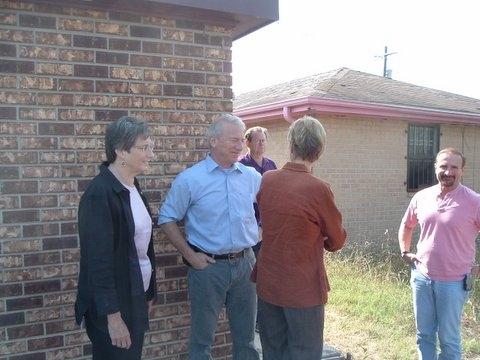