Tampa       The Wal-Mart Workers Association has been visible, vocal, and vehement for almost 9 months in the Tampa Bay and Orlando area about the fact that schedules are killing the workforce.  On one hand our members are not getting enough hours of work to afford to live and on the other the workers are being flipped like pancakes from morning to night on various shifts.   Recently, an article in the Wall Street Journal  (excerpted below) came to Florida talked to WWA members as well as Rick Smith, our Florida director, and got an earful.

Interestingly, the article pointed out that other “big box” retailers that depend on service for sales have already had to solve the problem of schedules.  Wal-Mart’s fundamental business model miscalculation of seeing labor as simply another commodity depending on interchangeability and low pricing seems to be creating a pyramid game that is eroding its same store sales.

As Rick, the organizing and research staff, and I meet today it seems clearer and clearer that they may not like us, but they sure better be listening to us.

At a Wal-Mart supercenter in Apopka, Fla., 66-year-old Cora Brown says she had to fight to keep her schedule as a cashier after her husband fell ill last spring. Meanwhile, the eight-year Wal-Mart veteran says she has seen a number of co-workers quit amid tighter work-shift rules. Those who haven’t quit have found themselves working more oddball shifts, she says.
“They’ll call them in at 7 a.m. on Monday, 10 a.m. on Tuesday and three in the afternoon on Wednesday,” Brown says.

Over the past year, Wal-Mart has quietly focused on tackling a tricky problem: how to improve spotty customer service while keeping a lid on its payroll, which covers 1.3 million employees in the U.S. alone. The key, management says, is to better match work shifts with the ebb and flow of customer traffic. But if a few big retail chains have been successful with the strategy, Wal-Mart has stumbled with moves that have drawn complaints from workers. In addition to irregular shifts, employees say last-minute schedule changes have become more frequent, and that managers are getting tougher on workers who call in sick or don’t show up for shifts amid the recent shuffles.

“If you go out to Wal-Mart workers and ask them, they’ll tell you their No. 1 issue is the scheduling,” says Rick Smith, executive director of the Wal-Mart Workers Association, a Florida-based advocacy group. “It’s No. 1 above health care, there’s no question about it.”

More recently, a few pilot tests of strict new policies made the news. In September, workers from stores in Florida’s Tampa and Orlando areas staged press conferences for local news outlets, with single mothers complaining they lost hours and benefits when they failed to comply with new scheduling demands. Wal-Mart responded that the stores had simply become more rigid about enforcing computer-generated time sheets from a centralized system already in place.

“Sometimes we have to make tough decisions,” Wal-Mart spokesman Dan Fogleman responded in a written statement. “Ultimately, we will staff our stores in a manner that best meets the needs of our customers.”
Wal-Mart began a new round of pilot tests on scheduling this month. The company expects to continue the tests through the summer, but hasn’t determined when a new policy will be rolled out to all stores. Executives added that Wal-Mart’s ratio of part-time workers to full-time workers has climbed slightly in recent years to about 25%, but that the company doesn’t target a specific proportion of part-timers.

“We are out there to see what works and what doesn’t,” Curran said. “It’s a work in progress.”

Wal-Mart aims eventually to schedule its work shifts to track customer-demand curves in 10-minute segments, Curran said. That would be ahead of the current industry benchmark of 15 minutes, says John Minnich, vice president at H.B. Maynard & Co., a Pittsburgh-based workforce consultant. But while labor scheduling has been practiced for decades among manufacturers, it’s still a relatively young science in retailing, and the challenge is especially stiff for complex businesses like supermarkets and discounters, Minnich says.

Beyond the sheer scope of its operations, Wal-Mart may face a challenge from its own store culture, adds Robert Garf, an analyst at AMR Research Inc. in Boston. He notes Home Depot Inc. (HD) and Lowe’s Cos. (LOW) already have mastered labor scheduling out of necessity, since customer service is crucial to closing sales in the home-improvement niche. Meanwhile, Wal-Mart often has trouble just getting its part-time workers to show up for their shifts.

That can become a significant problem when it comes to the basic business of staffing cash registers, Garf says. Brown, the cashier at Wal-Mart’s store in Apopka, Fla., says she can testify to that. Wal-Mart usually schedules between 10 and 18 cashiers for the busy weekend shifts at the Apopka store, Brown says.

“You’ve got teenagers that have been out partying all night, and mothers that can’t find a babysitter on Saturday morning, so it’s typical for about a third of them not to show up,” Brown says. “So we end up with long lines and all these people raising the Devil.” 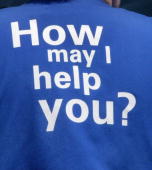