Santa Fe           Every year about this time the supervisory level staff of the whole ACORN family of organizations meets in a mid-year management meeting (MYM) to evaluate progress over the first six months of the year, think about where we are going, and retool for the final six months of the year.  A highlight of the meeting this year was the guest appearance of Zephyr Teachout who we convinced to spend most of two days flying from Vermont to New Mexico and back in order to spend a couple of hours with us strategizing, proselytizing, and teaching us how to build a larger “membership” and power using the internet.

Zephyr was the director of on-line organizing for the Dean Campaign in 2004 and critical to the phenomena of the Deaniac brigade of volunteers and activists.  She was an underground legend during the campaign and it’s only after this session that it became clearer why that would be.

In looking at using the internet for the project of progressive organizations the simplest way to boil down Zephyr’s rules for internet organizing would be to simply state — it’s all about the people.   The benchmark test buried in every solid nuts and bolts piece of advice Zephyr offered seemed to be whether or not communication was enhanced between people.  The internet for her is clearly an organizing tool used to celebrate the individuality of the person behind the internet address.  At one point she almost sounded archaic as she described the use of the internet by people to “allow them to become the complete creative people that they are.”

Now as hard-boiled, jaded organizers one could scoff at the naivete and liberalism of her vision, but one can imagine how easy it was for her to practice what she preached and really have hundreds of thousands of people believe that she was communicating to them individually — and passionately — and allowing them to in fact do the same with her and “be” the campaign in a very real way.  Her rules about protecting the list were about nurturing rather than security.  When she talked about letting problems define the rules of communication within the membership using the social networking of the list, she was the playground monitor letting the kids run until some tripped before setting the rule.

Her rules were to keep it real, keep it simple, be direct, and let people own and act.

These were the watchwords of a brilliant organizer who happened to have grabbed a new tool and used it to move people.  She was no geek — quite the contrary.  But, she did a great job taking the pros, young and old, sitting in Santa Fe to school to learn some new tricks. 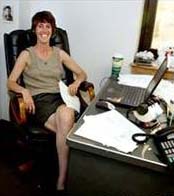