Santa Fe         Chris Sturgis is an experienced hand at the fundraising rodeo.  She has been a program officer at Mott in Michigan, Omidyar in California, and is still working on that side of the street here and there.  She offered to do a session at our Mid-Year Management Meeting on how foundations really work.  This almost seemed like a space filler, but what the heck, why not, organizers are always looking for a silver bullet, so at the least they will learn there’s no magic.  But, lo and behold it got rave reviews!

I listened in for a minute here and there.  Chris was going through a frank and graphic description of what it is like being a program officer for a foundation visiting a local ACORN office.  Her main point, which was irresistible, seemed to be that “program officers are people, too — who knew?  Discuss!”  She was almost walking our people through an intervention so that they could look past the program officer as just a “no” person and a “walking checkbook,” and instead see them as people with too little time, too much to read, who were desperately trying to figure out a way to understand, compare, and not get bitten by some front page story with ACORN being at the center of a “man biting the dog” story read by their bosses and trustees.  Hmmmm?

Chris advised novel concepts, like potentially not introducing them to leaders on the first visit.  She suggested the organizers actually google the program officers and find out who they were, where they had been, what they thought and cared about.  What a concept — research the person, not just the foundation!

For too many organizers who see foundations and funders as a presumptive entitlement, this was in fact very helpful, even if it involved some cultural conflicts and might force some rethinking.  One started to think that if we could learn to really, really see program officers and their bosses that way, maybe a day might come where they could really see us and our members as real people, too.

One step at a time though. 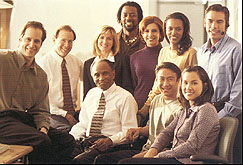 Members of the Charles Mott Foundation, they are people too.