Mumbai          The meeting was slowly pulling together at the Indian Chamber of Commerce building near Churchgate.  Mohan Gurani and C.T. Shanghvi from the FAM were running the meeting and giving the background on the fight they had been waging in somewhat lonely and unrewarding fashion since 1999 against proposals to allow foreign direct investment (FDI) in retail.  There were union leaders I had met 11 months ago in the meeting at Mumbai University we had held on this subject.  Vinod Shetty, our lawyer and counselor, was there with us at Reena Desai’s invitation.  Our friends from the co-op movement were there of course.  The rest of the room was filled with other key movers and shakers among the trade associations and protection groups.  This was a big tent meeting with unlikely allies drawing together across political and left-right divisions because they were united in their concern about the impact of multi-national retailers into the commercial activities of the country.

These meetings are amazingly fun, but they are not for the weak at heart or the timid soul. The traders conduct their business at the top of their lungs like street vendors and stall keepers in the bazaar.  Disagreements were quick and hearty on both strategy and tactics.   It became clear quickly that there was both a hunger for action and to get the campaign on track as well as some unresolved issues about whether or not to distinguish MNC’s from local big box retailers still enjoying protection, but also hurting small traders.  Gradually though a consensus was defined to mobilize a ground campaign in a suburb area around a huge new mall which featured the South African retailer, Shoprite, which most thought was in violation of existing laws as well as the monopoly practices acts which guards against anti-trust activity in India.

We seemed to get some traction on a dual strategy of both trying aggressively to lock the front door against the imposition of FDI in retail and also increasingly locking the back door with rearguard and other legislative initiatives to defend against likely adverse impacts and predatory practices.  Reena and I both felt we were seeing the campaign finally begin to get focus, commitment, and momentum.

Meetings in India are hospitable affairs.  Water, orange drink, and tea were served at different times.  Sandwiches with a samosa were served as a light snack.  There was a small dessert.  We spoke at length outside once the meeting was over.  Mr. Shanghvi was a delight.  I asked him about his friendship with Reena’s great grandfather and he spoke of when they lived a half-block apart in a smaller Mumbai which made him nostalgic as he described their common membership in an organization as well as being neighbors in the years 1930-1950.  In one of the largest cities in the world the coincidence was moving and amazing to me.

We visited briefly with another of our advisors.  He was active in an organization that was overtly nationalist and part of the base for the RSS and the BJP, the right party.  He worked at a family business started by his father in the 30’s to sell kerosene stoves.   After tea and more advice he accompanied me on the amazing and world famous (infamous?) trains of Mumbai where we joined the rest of the commuters in one of the most amazing rush hours (note the plural!) I have ever witnessed.  For about $2.00 I got a pass in the first class car.  A monthly pass would have hardly been $10.00 USD.  We were miraculously able to find a seat at Churchgate Station, but as the stops multiplied leaving the old city the scrum of people all around us was standing room only and knee to knee.  The grated window was close by, but the people and the normal temperature and humidity made it a sweatbox.  Fortunately our friend was with me so he knew 45 minutes into the trip that we needed to make our move and start pushing and shoving to within range of the door in the stop prior to Goregon, which was my destination.  This was a crushing crowd where I could not move to the right or left but only push with my weight and size against the mass to make it move.  I now understand why there were separate trains for me versus women and children.  There was no concept of private space here.  At Goregon we managed to shove our way out and in amazement I turned back to watch the space fill up and the train left with people hanging out of the doorway precariously.

This was the real and authentic Mumbai!

And it was a great day! 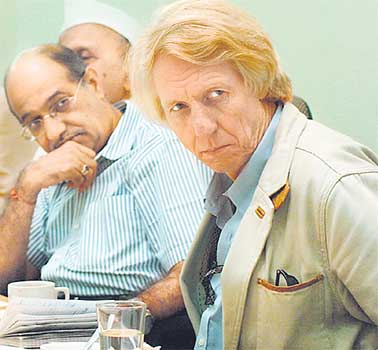 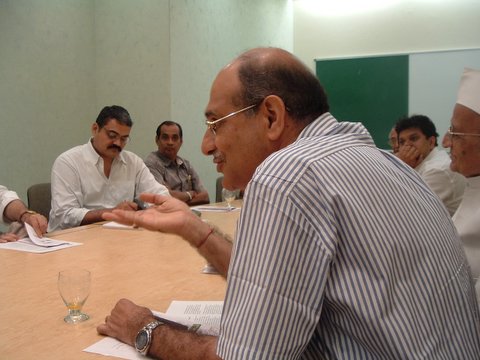 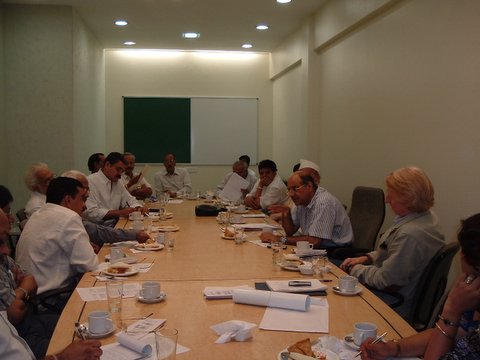 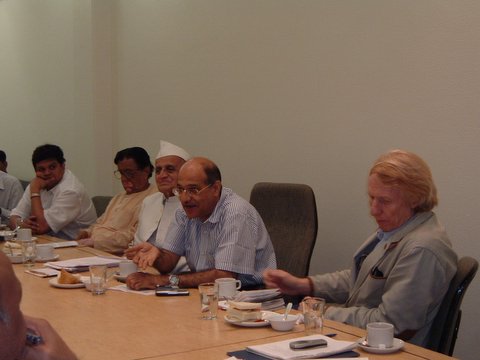