Vancouver     The World Urban Forum is a biennial affair put together by UN-Habitat to look the issue raised by cities and the continued concentration of the world’s population in urban areas and the massive issues that follow.  They talk about these problems at least, and we will have to see if they do anything about them.  For us this is an opportunity to learn about what others are trying, to meet in one place with friends and allies from around the world, and to give voice to issues about inadequate housing, Katrina, and other issues.

Judy Duncan, head organizer of ACORN Canada, and I met at the YWCA near our office outside of the board meeting of Habitat International Coalition, which is coordinating the protest, that we are co-sponsoring later in the week.  We talked to Michael Kane, who runs a HUD Tenants group in section 8 supported housing around the U.S., who briefed us on the activities.  The real reason we were there though was to catch up with Na.

Na Hyowoo is the director of LOCOA (Leaders and Organizers of Community Organizations of Asia), who steadfast and faithful readers will recall spent time with ACORN in Oakland last year on his sabbatical from LOCOA, and has been a frequent companion in trying to figure out ways that ACORN partner more effectively in Asia with all of their organizations.   Na is a member of the HI-C board, so we had arranged to visit when they broke up.

Na was full of news about many of our friends and the new focus of LOCOA, which seems mainly focused on trying to work in China.  He talked about the emerging growth of non-profits in China and his hope that this will presage openings for community organization.  He had visited several times and talked to many people around China and felt that the natural focus on community by the Chinese would be a natural platform for these developments in coming years.  LOCOA was going to begin training organizers on a regular basis for Oxfam-China very soon, and this might prime the future organizing when these folks returned.  They were relocating the central office of LOCOA to Seoul, Korea in order to position themselves more adequately for this opportunity.

As interesting, Na had tried to implement some pieces of the ACORN model that he had learned in Oakland in some trials in Korea.  He felt the response rate was less than what we found on the door knocking, but it really did not seem that far off when I hear the numbers.  They had moved about 1000 people he said.

Na wanted me to see the work soon, and we talked about meetings with all of these people when it could all put together.  We talked about whether or not there was really a way to pull the world together.  Perhaps there is. 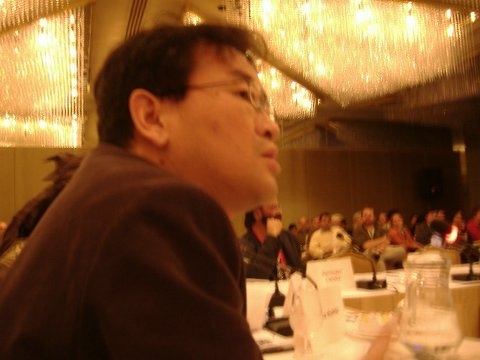 Na Hyowoo, the director of LOCOA (Leaders and Organizers of Community Organizations of Asia)