July 16, 2006 – Shreveport: On Saturday afternoon and Sunday morning, 35 stewards with Local 100 SEIU (www.seiu100.org) gathered in the Ironworkers Union Hall, where we have our offices. They came from Shreveport of course but also from Little Rock, Dallas, Houston, and New Orleans. They came in high spirits and good mood. Within minutes of starting to go around the room and speak they reminded all of us old hands, why we do this work and why it’s so important.

After brief introductions and a welcome by Roosevelt Smalley, President of the local Central Trades Council of the AFL-CIO, the first item on the agenda was allowing anyone who wanted to do so to talk about how they had joined the union and became a leader in Local 100. Rosetta Gore, VP of Local 100 from Little Rock, who was moderating the session, started off with her story of problems with supervisors and write-ups and survival on the job, which changed when she stood up with the union. And, then the deluge! One member after another got up and told their story for the next hour.

Angela Adkins, one of the 100 stewards from Caddo Community Action Head Start, talked about the ability of even small groups in the local centers to bring justice and reconciliation around long-standing grievances. Her natural understanding of the solidarity with the nursing home workers in Shreveport’s neighborhood nursing homes was fundamental.

Lashon Hollmon, a steward from Gulf Coast Community Services in Houston, a unit of over 1000 when we first won the election, told an animated story about winning reinstatement and panicking after years of flawless service when her father was in the hospital. In Perry Mason style the grievance was won when she and Orell Fitzsimmons, Local 100 organizing director, produced cell phone records proving that she had called in for a meeting that the agency claimed she had abandoned. One of the 9 calls was even to the cell phone of the head of Human Resources. Duh! Another time she was written up for eating on the job, and when they showed up for the grievance hearing the supervisor was — you guessed it! — eating at her desk!

The leaders loved these stories, and there were various versions of them told over and over again. Both big campaigns and small, individual victories combined to create deep commitments that were forged of steel and joined people together in the union.

Nothing fancy about this meeting. It was old school, Local 100. Before people started they made sandwiches themselves with cold cuts or peanut butter and jelly, washed down with soda pops or water. A coffee pot was on the warmer throughout the meeting. The big event found everyone at the Catfish Village enjoying the “all you can eat” special.

It is on this foundation that a union is build that can stand the tests of time and struggle. 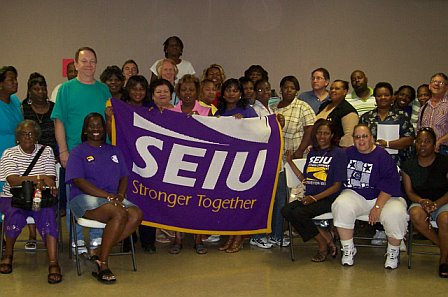