July 14, 2006 – Washington: There is a word for what we are doing with our campaign to raise the minimum wage across the country, even if it is one that progressives have had precious little reason to remember lately: winning!

Just like the theme of our recent convention, we have “raised our states” in two more cases in as many weeks: North Carolina and Pennsylvania. In Carolina workers got a buck more than the minimum ($6.15 in 07) and that will pull up almost 130,000 workers. In Pennsylvania brotherly love was worth two bills ($7.15 in 07). ACORN, labor, and many others were involved in coalitions pushing for these victories in both states — momentum keeps building to raise the minimum wages.

At this rate there will only be a handful at the end of this year and it will be safe for Congress to even finally act, since their job these days is to trail the American people by as great as distance as they can. There just are not too many working families, rich families, or anything else families who believe that the federal cheapskate wage works for anyone anymore.

Maybe we should have a betting pool on which state is going to raise their wages next? Anyone want some of that action? 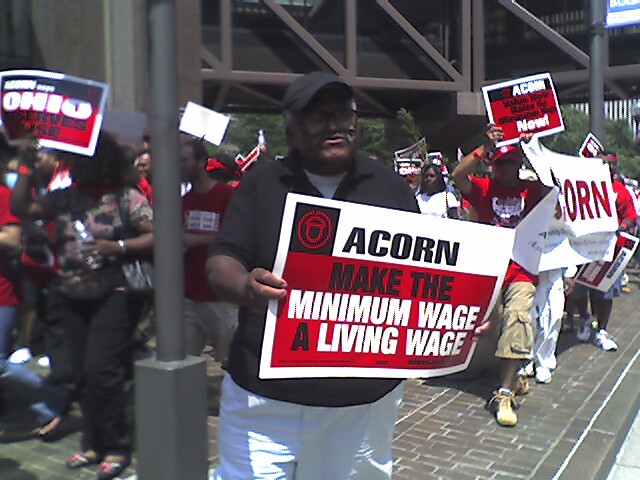 Marching toward a wage increase: a scene from ACORN’s 2006 “Raising our States” convention.