Buenos Aires      We heard the noise and all walked out on the balcony of one of the newest ACORN offices in the world in Buenos Aires, where Ercilia Sahores, ACORN’s Latin American Director, and three other organizers have spent the first month of ACORN Argentina laying the groundwork for our first community organizations in La Boca and La Barracas.   From the 10th floor we could follow the noise of the march as it came up Medrano and turned on our corner towards the capital, Casa Rosada.

There were no flags or signs.  There was no quick pace or music.  There were no colorful vests heralding the pride and purpose of the marchers, which I found so moving in the days of the piquetaros.  There were several hundred retirees still marching for the restoration of their pensions almost five years after the economic crises in this country, which capsized the social structure in Argentina.  The economy is much improved now and business is happy with the political stability achieved under President Nelson Kirchner, who dealt toughly with both his international creditors and the social movements that had sprung up to meet the crises.  Unfortunately, in the same way that the President restructured and walked away from the debts with the World Bank and the International Monetary Fund, he has also not restored the draconian cutbacks in social services that his predecessor had implemented in the meltdown.

Regional economies are also improved.  The fiercely nationalist Argentine staff for ACORN groused about all of the Chilean businesses that were increasingly moving into Argentina and the dominance of the LAN Chile national airline of more and more of the travel around South America, and therefore the increasing price of everything.  The exchange is still three pesos to the dollar, so prices are relatively cheap and remaining constant to the devaluation which was one to one before the crises.  More and more English is heard on the street in some chic areas near downtown as foreigners pick up bargains in real estate, which though rising here, seem like bargains back to wherever they called home.

Last night we pulled Steve Kest, ACORN’s Executive Director, out of his vacation for a meeting in the colorful Cafe Tortoni with his daughter, Anna, and later were joined by Cate Poe for dinner.  He mentioned an old buddy from his high school days that had recently bought a condo in Buenos Aires to retire when the time came, once again proving the rumor with factual antidote.

It may be one world, but it’s a rough one! 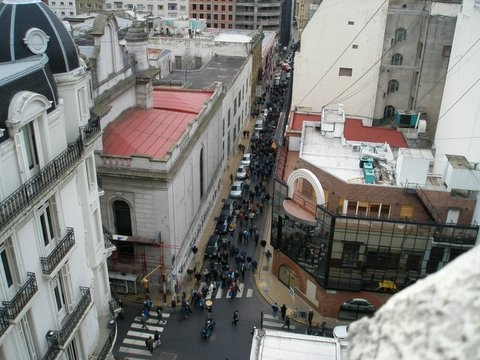 View of the march from the new Buenos Aries ACORN office