Montevideo     Uruguay is not exactly a “must visit” location for much of the world, but we had meetings to make here and ferried across the Rio de la Plata to this city of 1.5 million people holding almost half of the country’s population.

I left the United States in the grip of confusion over the outbreak of another series of unfortunate and tragic wars in the Middle East.  Here in the southern cone, it is hard to follow the developments, although the amount of graffiti on walls and buildings in Uruguay and Argentina make it seem that the Israeli actions in Lebanon do not have “street” support at least.  In fact in today’s paper — El Pais — there was a big article about the United States and France trying to broker a peace plan in the Middle East, but none of us could figure out what the plan or program might be for the life of us.  All we can do is hope for the best.

The mate thing here is serious though.  Starbucks and others must be dying that they can’t hope for this scale of addiction!  Uruguayans, one after another, had their arms crooked around a mate thermos and were sucking through silver plated straws into special mate cups almost continually as we saw them in the Independencia Plaza or in the open market.  Young and old, men and women, there seemed virtually no group safe from being in the “suck” of it.   From a distance one looks at the swimming green leaves of mate floating at the top of the cup and it is hard to find the immediate attraction, but like any way of administering caffeine and its friends to the body, this must be some very good and powerful stuff or our friends in the cone would not be so enamored. 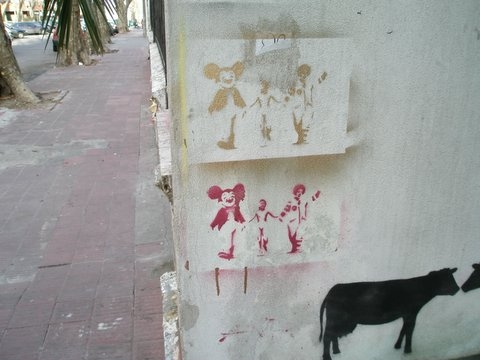