Montevideo        With every day we come closer to the one-year anniversary of the devastation of New Orleans by Katrina.  Every day we also become more deeply mired in the seemingly endless case study in frustration and hypocrisy that passes for professional “planning.”  With the election for Mayor long over and gone, and the Canizaro-Urban Land Institute land and power grab thoroughly abandoned and discredited, and money finally beginning to creep out of the tight fists of the government to citizens desperate to rebuild their flood ravished homes, you would think that our misery was at last coming to an end — or at the least our thankless circle of purgatory was gradually improving.  Well, not so much.

There were fistfuls of planning efforts under way.  ACORN had great partners in the 9th ward and New Orleans in Cornell, Pratt, and LSU some of which were about to see the beginning of actual construction.  Some other neighborhoods at started similar partnerships and were moving forward.  The City Council allocated some money and hired some planners, even before the election, at a pretty price and without a bid, but they were forcing themselves in the game, and at least their planners reached out to people like ACORN, rather than the aloof, unable to see past Poydras Street view of the ULI group.  The state backed Louisiana Recovery Authority had spent a lot of money with Andres Duany and various charettes that promoted the “new urbanism” which was not without its own brand of controversy.  The Mayor’s Canizaro committee used Reed Korloff, the Dean of the Tulane School of Architecture, a thoroughly and aggressively committed modernist, and a planner named Ray Manning from Louisiana, but without money they just involved themselves in name calling it seemed.  Then the Rockefeller Foundation got into the act by pledging $3.5 million dollars to be matched by another $1 million from the Greater New Orleans Foundation, if all of these efforts could be brought together into one — a carrot and stick approach that they hoped would work in a poor city.   I hope you are still with me through all of these twists and turns because I become confused myself!

The next saga in this story is first about poseurs.  Various powers, that want to be, tried to construct a committee of central actors to help “oversee” and bring this together.  First, they tried to rein in ACORN and others that had an actual community and citizen base.  They tried to hogtie us into a roulette, where we would decide who was in and who was out among the community organizations.  ACORN entered a pact with the Jeremiah Project (an IAF affiliate) and ACT (a PICO) affiliate to not sit on the committee unless there were three seats, one for each of us.  This mess lasted interminably as various ambassadors tired to convince us that we had one seat “for sure,” and we just needed to align and limit.  Our coalition held true, and it was easier to maintain as one of the biggest of the striving “want a be’s,” from the mis-named “committee for a better New Orleans” — which was the earlier Canizaro pre-Nagin first election “reform” vehicle, tried to push themselves into one seat thereby further diminishing any impact for the community.

At the 11th hour we finally decided with our partners to turn the tables and enter the process ourselves and compete for a spot as a district and/or neighborhood planner.  With the yeoman’s help of our interns from Cornell and Pratt by the due date that Monday afternoon, we entered an application under the rubric of the ACORN Housing Corporation and the entire partnership.

Oh, mercy, and now the stuff starts flying, because damned if in a huge competition with 65 entries from all around the city and the country, if to everyone’s shock and surprise, ACORN doesn’t emerge as one of the 15 selected and is on the list both as a qualified district and neighborhood planner!    Does this finally settle it down now that all of the tables are topsy-turvey?  Of course not!  In fact now the stuff starts getting positively weird.

No one, and I mean, no one, can figure out how the real planners will be chosen.  Floating crap games have rules that are much more transparent.

Here’s a good example.  In a totally confusing episode and with little announcement and by evidence what must have been virtually no real planning, the folks contracted to run the process of selection by the foundations (I guess, because I’m still not clear) call a hasty meeting to hear what is already happening in various districts.  They call the meeting for a building in City Park next to the Botanical Garden, such as it is now.

You walk in on a Sunday (the last Sunday in July) and there is total anarchy and chaos, but dangerous in the worst of these ways.  A citizen first has to register and find themselves on a map that indicates their “planning district.”  Then when you get to that district, you are looking at a couple of chairs separated by virtually nothing more than poster board between you and the next “planning group.”  There is somebody clearly being paid as a “facilitator” who is totally out of any league playing ball.  Only the early risers sitting in the 4-5 chairs nearest the “facilitator” have any chance of hearing a single word being said.  All that can be heard is different hidden agendas when they arise, if someone gets up and speaks loudly to them, for example the stalking horse of putting the planning process “into legal form” through a separate “charter vote,” which is basically an effort to strip the elected City Council from having any land use voice in the City of New Orleans, and empower some self-appointed group instead.  This was also one of the vestiges of the old and discredited Canizaro Committee.

After an hour of unadulterated confusion and frustration and assurances by the “facilitator” that no binding vote or action is going to be taken, I actually left believing that going to a worm dig might  be a better use of my Sunday.  Fortunately, there were a lot of ACORN members and leaders who had more patience and stayed to watch this all turn into lies, since there was then a call for a vote before the end bell on this horror show was run on whether or not individual neighborhoods would get their own planners or it would be by district.  This is actually very important.

Not that it really mattered, since nothing about this ridiculous process seems to matter, as becomes clearer.

On August 1st all of the first 15 go back to that same scene of the crime and present their case to whoever attended to be selected.  This is a presentation in preparation for a vote of the areas to actually select the planner.  The ACORN team went first with a three some presenting of Richard Hayes from ACORN Housing, Steve Bradberry, the head organizer of New Orleans ACORN, and the finale by Ron Schiffman of the Pratt Institute in New York City.  All reports (ok, Steve told me this, but others agreed) indicate that we “rocked!”

Anyway then the voting begins both in the city and throughout the diaspora.  The fools running this circus called the “unity” plan or something of course mainly throughout about how you could vote using the internet, which is almost laughable for New Orleans and our people, but whatever.  The votes are pouring in with a deadline of August 7th.  Beth Butler, head organizer of Louisiana ACORN, seems increasingly comfortable with this chaos and predicts that there is no way that the ACORN team will not win several different planning tasks.

One would rationally think that would be because of the strong vote by community residents for the ACORN team.

WRONG!  The mis-managers have now declared that the votes are not binding for cry-eye, they are just “advisory.”

Mike Shea, the executive director of ACORN Housing, is mellow about all of this at this point, being a veteran of things New Orleans.  He reports that we were always assured once we made the first round that we would have two districts, and that we might pick up some neighborhoods as well, so the “voting” is more of an insurance policy against chicanery.   As we know too often in New Orleans these days, you can not have enough insurance!

Some combination of foundations that can not spell the word accountability and planners and architects who never imagined what it might mean to really be forced to devise a “bottom up” process has produced something in New Orleans that fits the lords of misrule and mayhem of a city comfortable with carnival.   Most of us thought the hurricane was over.  We did not realize that there is no end to the misery and confusion for all of us committed to staying and rebuilding.

This is a story for someone like Mike Davis to tell.

I know we are winning and I know this is a major, major breakthrough, but damned if I can follow the lines from point to point without a map and someone taking me by the hand.  Scary to think that the future of whole neighborhoods, if not the city itself rests on just such a process. 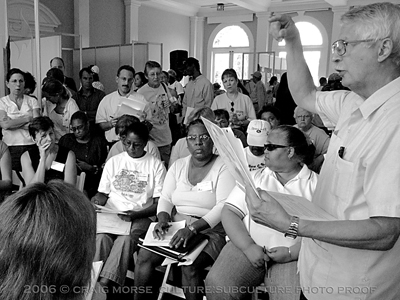 The circus that they called the New Orleans neighborhood planning meeting