Hilda Herzer was a delightful, bubbly personality who combines her work in the sociology department on the faculty of the University of Buenos Aires with an avocation for getting to the heart of the question as Research Director for Data Markets, a non-profit think tank in the city.  She insisted at coming to our office for our meager fare of excited conversation and sad instant coffee, and inundated us with information about the neighborhoods where Argentina ACORN is working with committees on its first drives, La Boca and Barancas.  Hilda had been studying these areas for years so had an indispensable overview.  She explained that she had started with a “hypothesis” that the result of public investment in the aftermath of flooding from the Rio de la Plata in La Boca was likely to be an escalation of prices and a pushing out and gentrification process within the neighborhood.  Her research was finding this to be true, and our work on the ground was finding residents increasingly feeling like they were holding on under pressure from developers.

One issue we had heard on the streets repeatedly was the problem of fires.  Fires often mean arson when there are developers lurking in the background.  [We see that in New Orleans now!]  Hilda felt the same thing was at work.  We had found a fellow traveler and a kindred spirit in Hilda Herzer, so that we could test what we were learning daily on the doors.

Father Pichi Meisegeier was another story as we found him across town in the offices of SEDECA, a coalition of social movements and non-profits, focused on housing and micro-credit.  His organization had begun in opposition to the dictatorship, and in the classic Jesuit tradition had hunkered down with the base communities, gotten grants from near and far (including the Inter American Fund), and built social housing dotted throughout the metropolitan area.  Father Pichi made an interesting point as he stood before the maps around his conference room.  His point was the opposite of what we had heard in Santiago, because he argued there was an incredible density in Buenos Aires in the federal district with more than 80-85% of the population in that area and very little spread out.

Father Pichi kidded about CIA money.  Those had been hard times and obviously there was some gallows humor that kept a smile on his face.  Young people bustled about his office as he shuffled among them unobtrusively.  We asked if they were volunteers.  He joked that no one is a volunteer anymore!

We have a lot to learn in Buenos Aires, but we have found some good teachers. 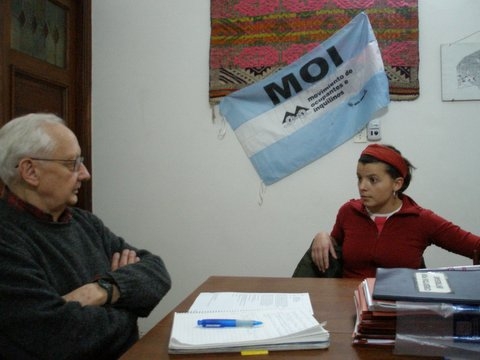 Father Picci talking to ACORN’s Latin America Director Ercilia Sahores in front of the MOI flag in his conference room.