New Orleans      New Orleans ACORN won again late Friday after a grueling and seemingly interminable City Council meeting when the Council voted to extend the controversial “gutting deadline” which had been stuck on the Katrina Anniversary, August 29th.  After a long public fight and some sharp elbows inside, ACORN got the Council to vote 7-0 to provide additional notice and time for families to get on the “gutting” list and then get the job done.

The preamble was a confrontation between Lower 9th ACORN leader Vanessa Gueringer and a number of the Council where she and others told them not to bother thinking about a political future of any kind or every crossing the door at the Elysian Fields building looking for ACORN help, if they deserted the thousands of families trying to come back.  They got the message.

Although ACORN housing is negotiating for more than 100 units of adjudicated housing all over the 9th Ward another crises emerged with the continued delays in establishing water and sewer connections, particularly in the Lower 9th.  City personnel advised against picking the houses because we could be stopped down there.  Quick New Orleans ACORN contacts to Marcia St. John, director of the Sewerage & Water Board, indicated exactly the opposite and St. John expressed full commitment to re-establishing potable water and establishing the infrastructure.  In a one-two punch ACORN also pressed Council President Oliver Thomas who put the S&WB on the council agenda to explain the progress in reconnecting the lower 9th by the next Council meeting.

Beulah Laboistrie, long time ACORN leader summed it up best on the phone, asking the rhetorical question, “Why do we have to fight so hard for every little thing,” and answering herself, noted “how much power we have built now!”

I thought of all of this later that night as a guess of the United Teachers of New Orleans (UTNO) and the American Federation of Teachers (AFT) at the Loews’ Hotel where they were wrapping up reports of a successful blitz of 1000 of their members to communicate the message that they were going to rise in the words of several speakers, “like a phoenix” again to fly strongly in the city.  The mess of 5 different school systems and now the abnegation of the UTNO collective bargaining agreement and termination of over 3000 teachers decimated what was the largest and strongest union in the city before the storm.  It was nice to be with friends there.  Organizers I knew from the AFL-CIO back to the Mariners’ campaign, including Sam Luebke, the deputy organizing director.  Saw Bob Como, who worked for Local 100 briefly, was Orell Fitzsimmons’ roommate, and was the organizing director for the famous Houston Organizing Project under the pre-Sweeney AFL-CIO, and now is a rep for AFT working out of San Antonio.  Jessica Smith, the former organizing director for the Seafarers International Union, and now with AFT’s organizing department and our partner in New York on the drives last year was all over this meeting, and had called to invite us.  New friends, old friends!

Saw Leo Laventhal, who graduated one year ahead of me at Franklin and taught my daughter one semester when she attended.  He told me that he had retired rather than go back to Franklin as a charter school when he read the second line of the principles which declared their opposition to unions.  He told me that Linda Patrick, a dear old friend from my class at Franklin, had retired from Lutcher for the same reason.  We learned values at Franklin in the 60’s, which they are erasing now.

Brenda Mitchell, the president of UTNO, was in great spirited form and it was good to see her after such a long time, even though now she is the leader of diminished army.  Nat LaCour, the secretary-treasurer of AFT, and an old friend and former chief or UTNO, was there to give the closing remarks, which were moving.  He singled out ACORN as the one organization among many that had totally stepped up to face the crises of rebuilding the city since the hurricane.  He knew it was right, and he meant it.  He embarrassed me personally with his praise for my work with their union, ACORN, and Local 100 SEIU, but it spoke to the many fights and many years we have worked together, and the bonds those decades of struggle welded together.

Without UTNO it is hard to imagine that the public schools can come back, so seeing them in the fight made all of us feel a lot better on a hot and humid night! 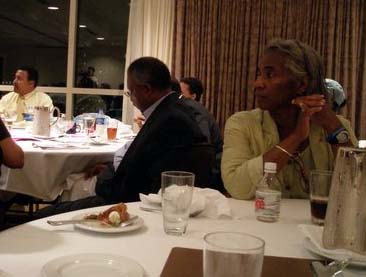