New Orleans      Ok, technically someone in civic class would raise their hands and say that a “pocket” veto means that a bill was not vetoed technically, but died since it was not signed.  There is a new definition though that has been added to any high school civic class this week in Chicago by Mayor Richie Daley.  A pocket veto should from this point forward also be a veto made by a mayor who is totally in the pocket of any corporation!

Wal-Mart, joined at the whining wall by Target and a host of big box buddies, all claimed that they were going to be totally outside the loop of the city of Chicago if they had to be good corporate citizens in the communities in which they built stores and operated by paying a minimally adequate wage level.  Though ACORN and our labor allies had combined successfully to win what numerically was a “veto-proof” majority, meaning that the number of alderman was more than the 2/3rds needed to override any attempted Daley veto, we are still fighting the problem of the pocket veto.  This has been Daley’s first veto in over 15 years, but of course in dealing with the 2nd largest company in the world, this is the first time he new there was someone who could fill all of the pockets for the veto!

According to the Chicago Tribune three flippers have identified themselves and indicated they are willing to be running dogs for Wal-Mart rather than stand up for their communities.  Particularly in one sad, sad quote from a city councilwoman who seemed to be both claiming and begging simultaneously that Wal-Mart had kinda sorta promised that they would build a store in her district, maybe, kinda, sorta.  She is all about the pocket veto, since she is clearly a heckuva negotiator.

ACORN countered yesterday with a series of actions at the Mayor’s press conference and a bus tour with hundreds to put pressure on a number of aldermen.

The vote is today, but the pocket veto is hard to fight when the mayor and some alderman are doing nothing but waving at the parade of money from the big boxes and yelling, “Throw me something!”

Speak out against the pocket veto and make sure that your elected officials are not pocket people! 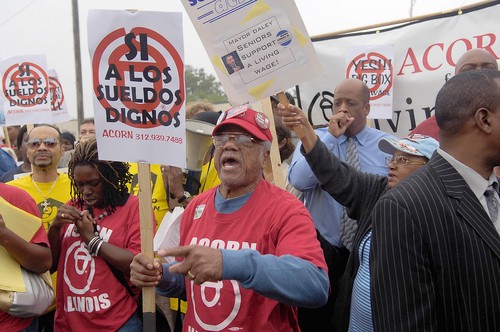 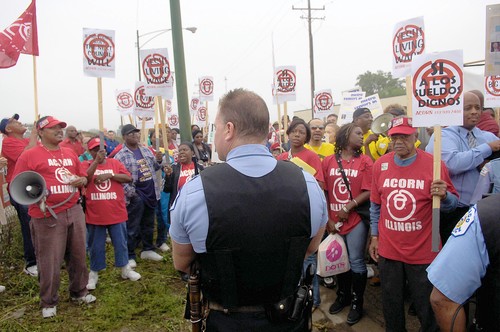