Athens      Another email alert came through from the India Resource Center, which has been at the vanguard of fighting Coca Cola especially in India.  I also regularly get emails from something called “KillerCoke,” which the company also must just love!

The campaign had a breakthrough several weeks ago when they were virtually banned by two of the Indian states, including Kerala, where the resistance to Coke has been virtually a mass based social movement.  The Wall Street Journal and the Times both piled on with stories in the business sections about how badly Coke and Pepsi had underestimated their problems in India and were having to fight furiously to get back in the game.

The issue here is not that taste makes a difference, but that testing has shown that bottling plants are producing soft drinks with an extra additive — pesticides!  The resistance has been about not letting the drinks poison the community.  If this problem were in the US or EU, Coke would have closed the plant in a new york minute and gone out of its way to prove that their product was totally safe and pure.  It says something about global arrogance, that the corporate response has been so little, so late.

The Indian Supreme Court seems to have given the companies a break though and this was the subject of the most recent alert.  Kerala is pledging that this will not stop them.

This story is a long way from over.  In the meantime, do yourself a favor and push the coke down the counter.  If they can not sell it in India, they might be off loading it in the US, and you definitely do not want to drink this stuff.  And, even if you do, why not support the fight and spit it out on the ground where it belongs!

The issue here is not that taste makes a difference, but that testing has shown that bottling plants are producing soft drinks with an extra additive — pesticides!
The Coca-Cola company came under attack at its shareholder meeting for not disclosing the full extent of the liabilities the company has incurred in India. 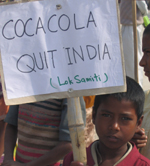