New Orleans     Kevin Whelan, the crack communications director for ACORN and a faithful reader of this blog, whose job about this time of the year is definitely not a barrel of laughs, called me in the middle of the afternoon yesterday, and laughingly said, “You aren’t going to believe this!” Of course since it had to do with the lawbreaking, crooked and partisan shenanigans of St. Louis Election Board Commissioner Scott Leiendecker, who spares no effort to prevent citizens from casting their ballots, I was ready to believe just about anything.

In the last week since Leiendecker first accused ACORN of turning in bad registrations, even though the Missouri law requires us to turn in Mickey Mouse if that was signed on the form, he has been in one mess after another. First, he tried to suppress the vote by mailing out letters to 5000 new voters turned in by ACORN trying to underhandedly convince them that perhaps they were not legally registered or couldn’t vote without calling him. After our lawyers immediately pulled his coat on this one, being the experienced con that he is, he simply said, “my bad,” knowing that the damage was already being done, and issued another letter rescinding the first illegal letter, complicating the confusion of course, which was undoubtedly his purpose all along.

The Missouri Supreme Court struck down the voter identification procedures (discussed yesterday), so all election commissioners were ordered to allow voters to cast their ballots in peace. Not good enough for our guy Leiendecker!

So, the Secretary of State Robin Carnahan tried to cast her ballot in the city. Three times she was denied the ability to vote because she had the audacity to instruct the clerk on the elements of the law and the fact that no identification was required. Remember, dear reader, that the Secretary of State is responsible for election conduct, so in many ways Leiendecker and his minions were under Carnahan’s authority. The clerk’s only defense, which of course I believe completely, is that she was told by Leiendecker to demand identification regardless.

He probably said something along the lines of, “who cares what the law says!,” since that seems to be the M.O. of this hardened con in St. Louis.

By DAVID A. LIEB, Associated Press Writer
49 minutes ago Missouri’s chief elections official said Monday she was asked for photo identification at the voting booth despite a court ruling striking down the requirement.

“I’m guessing this may be happening in other parts of the state,” warned Secretary of State Robin Carnahan, a Democrat who had opposed Republican efforts to mandate a photo ID in Missouri.

She said that a worker at the St. Louis Election Board asked her three times to show photo ID when she went to cast an absentee ballot Friday.

Carnahan said that she tried to explain a photo ID was not necessary, but that the election worker replied that she was instructed to ask for one anyway. Carnahan said she eventually was allowed to vote without displaying a photo identification.
“To have that experience personally was very troubling,” she said.

The Missouri Supreme Court last month upheld a lower court’s ruling overturning a law that would have required voters to show a photo ID issued by the state or federal government.

Scott Leiendecker, the Republican director of the St. Louis Election Board, did not immediately return a call Monday.

Carnahan said she spoke with Leiendecker, who assured her that the identification requirements would be clarified and that voters on Election Day would not be pressed to present a photo ID. 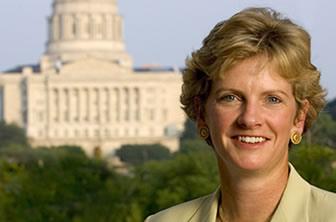