Seoul, South Korea  I’m as jaded and cynical as the next professional organizer, maybe more so, but I was impressed at the turnout at the Press Center on nothing more than the fact that some working organizer from the United States a “Wade Rathke” from ACORN — whatever that might be — was speaking on the simple topic of “How to Organize Community People.” The room was booked for 50 people. That’s what my friends and sponsors could afford, so there were no tricks involved, like deliberately getting too small a space for the crowd, but let’s say it like this, I stopped counting at 70 and some organizing soldiers stood along the side of the room for the entire 3 1/2 hours of the presentation.

My friend, Na Hyowoo, the energetic and irresistible organizer with the Asian NGO Center (www.asiangocenter.net), had put the word out and he and his associate knew they had trouble the day before when more than 50 had already registered. They quickly decided to charge a fee of 5000 won (c.$5 USD) to hold down the crowd, and did manage to collect from more than 60 at the gate, but there was a hunger. From what Na described to me the crowd consisted of community organizers and social workers who were active in community work (from what I understand organizing is not taught as part of community practice in Korea, but still community work attracts naturally a segment of the social workers). Some flew in on planes for the “lecture,” as it was billed. Several took a three hour bus ride from a city whose name I did not recognize. This was a hot ticket!

Do not be confused though. It was not about me. It was all about the work. Na carefully schooled me that, believe it or not, people did not want to hear about what ACORN had done or won. These were organizers and many of them were stuck in the work and looking for a way to do more and do it better. They were hungry for nuts and bolts! By god that’s just what I delivered. We did more than an hour in the beginning (including translating) on the principles that were at the foundation of ACORN. Then we did more than 45 minutes on a detailed presentation of how the ACORN Organizing Model worked, point by point, door by door. Then we gave the troops a 10 minute break and marched right through the challenges we now faced despite the success of the program, where we were going, and a couple of examples of what it all meant.

The last half hour was left for questions. The questions were detailed. One person wanted more on how the organizing committee worked. Another wanted to know how we dealt with group stagnation.

Na translated my remarks as we went along. This was clearly a team effort. Sometimes I would say a sentence and he would translate a paragraph. Once I caught the sly fox jumping ahead and talking about “doorknocking” (there is no equivalent expression in Korea!) even before I had mentioned it, solely based on the fact that I had written it on the white board and he was excited that it was coming! I would talk looking many of them right in the eyes, Na would then translate in an animated fashion, and the entire crowd would be bent over their notebooks jotting down the characters that transferred the information for the future. Some serious people were working here.

I embarrassed everyone somewhat by standing at the door and shaking their hands or bowing as they left. Not common to the culture, but I hope appreciated none the less. It was an honor to be able to spread the word about the work. Afterwards sitting over dinner with Na, Reverend Kim just in from Okinawa, and Fides, the director of LOCOA, who has just relocated the secretariat of this organization (Leaders and Organizers of Community Organization in Asia www.locoa.net) to Seoul, while picking at my porridge, I kept thinking how difficult it would be not to try and figure out a way for us to support the work of organizers so committed to moving forward, but facing obstacles we at ACORN knew too well.

Korea had not been at the top of any of our lists, but it is hard to say “no” to any group of men and women who are hungry to organize and desperate to succeed in the work. Na may have outsmarted me again!

Luring me here was part of it. The harder problem will be puzzling out an effective response. 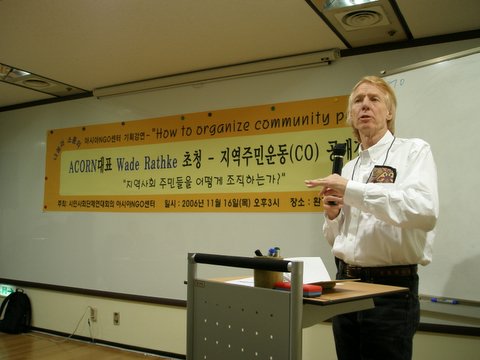 Presenting the principles of community organizing to a crowd. 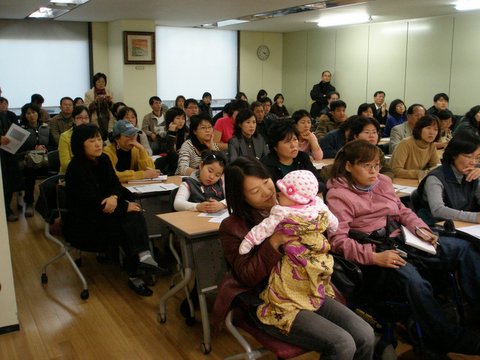 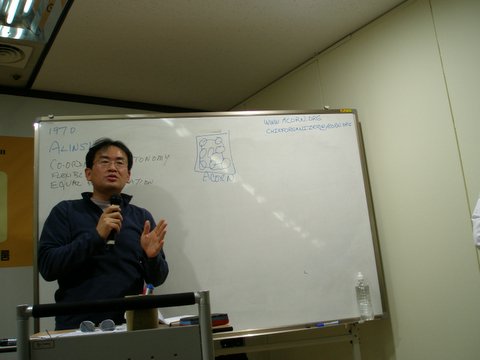 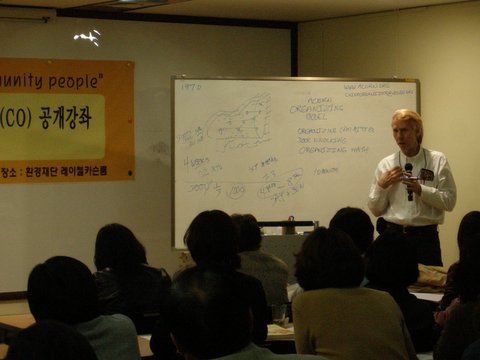