New Orleans               Simon Rosenberg of the New Democrat Network (NDN) is fast talking and to the point.  He has done the pitch before and it is honed to a fine point.  He had the board of the Organizers’ Forum (www.organizersforum.org) listening on the edge of their seats.  His message when it boiled down was simple:  either make the Hispanic voter part of the stable base vote of the Democratic Party or be sentenced to the dustbin of history.

According to Simon’s persuasive presentation, if we were willing to look at this constituency strategically, we had to understand that Hispanics currently were one of the most volatile voting blocks in the electorate, swinging wildly from cycle to cycle issue to issue.  He rattled of a half-dozen polls from his shop and the Pew Research Center that noted wild shifts on issues and interests, particularly based on getting media directed at this block of the overall electorate.  He believed that Rove and Bush understood this fully.  In fact he pointed out that over the last 2 years, Bush has only made two nationwide addresses:  one on the 9/11 anniversary and the other about immigration.  He noted that they moved from the low 20% mark in 2000 to the 30’s in 2002 and crested near 40% in 2004, until there was pushback because of the anti-immigration brigade of Republicans who went off message in 2006.  This whipsawing back and forth could push Hispanics back into the core Democratic column if there was discipline, innovation, and passage of some kind of immigration bill before 2008, which he believed would give the Demos more credit that the Republicans.

Of course this led to a pretty good back and forth about the pluses and minuses of the various bills, and particularly the gut check on whether or not there was a way to live with the political quid pro quo on the guest workers compromise.  The room ended up divided.

Simon made a interesting point about the connections between the party and soccer.  The NDN had given away soccer balls by the thousands and gotten Spanish speaking soccer announcers to do their ads while the games were being broadcast, and the impact was huge.  It made sense, no matter what one thought about any of the rest of the argument.

Bob Borsage of the Campaign for America’s Future and a comrade –in — arms of long standing shared with us some polling on the impact of the war.  Most interesting was his point that the party pols and pundit hangers-on were all ‘surprised on Iraq.’  The impact of Lamont’s finally losing race on Connecticut despite having pushed Lieberman off the Democratic ledge showed a lot of pol–pros that the war had big, wild running legs and that they needed to shift or be stomped.  Starting from the middle ground, he noted name and number on some of the politicians that ran to the anti-war banner.

After Simon, Bob was refreshing because he was willing to still state the obvious, that the support for the Democrats continues to be around issues like the war, minimum wage, and so forth, but voters indicate that — as opposed to the Republicans — they still really don’t know where the Democratic Party stands.

The message seemed clear.  The Democrats need a program and not just a message.  That lesson may be lost in the temporary euphoria in the aftermath of the election, so the slow learners will keep repeating this course! 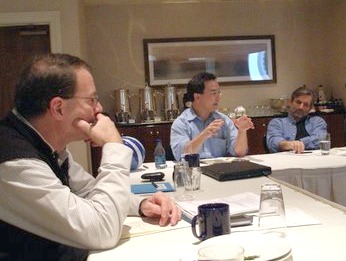 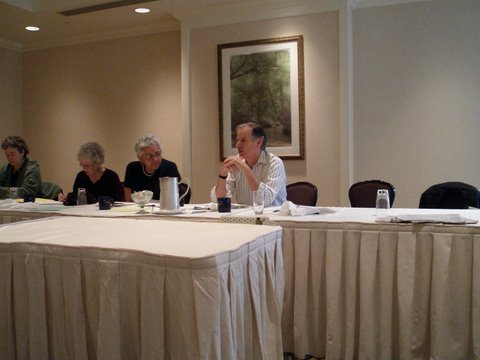