New Orleans     This is all getting to be heady stuff. We are not sure what it all means or whether or not it adds up to anything at the end of the day, but as long as it keeps Katrina in the mix, we can’t say “no,” just on the off chance it will bounce well.

A couple of weeks ago, we heard from Usher — the hip-hop hero! He came down with a crowd and said he wanted to help ACORN in the lower 9th Ward on the recovery work. Sounds good, let’s see if it steps off.

A couple of days ago I hear that a hush-hush celebrity call came in from someone. The New Orleans ACORN office was supposed to keep it down-low, so that crowds did not gather.

After it was over they flipped me a couple of pictures.

Turned out it was NBA basketball great, Charles Barkley. Someone Usher had told him that next time he was in New Orleans he needed to hook up with ACORN and see what he could do to help.

The New Orleans Hornets were going to be in town playing one of the only 5 measly “home” games of the season (they have mainly been dribbling in Oklahoma City of all places). Barkley is a commentator for TNT Sports so he wanted to walk around the lower 9 and do something for the pre-game or the half-time.

I missed it, but a call came in @ 1030 pm saying it had been the “Tanya Show!” Seems the piece must have run forever! Barkley, Tanya Harris (New Orleans ACORN head organizer), and some of the ACORN lower 9 leaders walked along Delery Street, and looked at the new construction we are doing with our partners.

And, thanks to Usher and Charles for doing the right thing for ACORN in the lower 9! 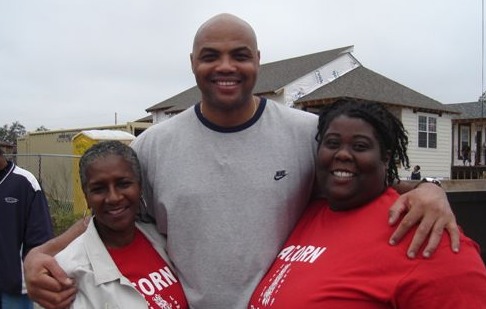 Charles with Tanya and Jeannette Trask