A piece in the Times yesterday was every campaign organizer’s secret dream come true.  A target was caught naked walking into an inadvertent trap.

Seems that PETA — the People for the Ethical Treatment of Animals — has been whacking Kentucky Fried Chicken for 4 years trying to get them to adopt better standards for handling their chickens, but so far the campaign has produced a lot of cluck and no scratch.  So to speak!   KFC is owned by Yum Brands which owns a mess of fast food operations including Taco Bell among others.

Here’s where it gets too Yum-y!

The real estate operation for Yum Brands made a $1,000,000 offer for a piece of property on the outskirts of Norfolk, Virginia so that they could build one of their taco stands.  Lo and behold, and obviously unbeknown to Yum, guess who the owner of the property turned out to be?  You got it:  the PETA Foundation — the 501c3 which supports PETA’s mayhem for animal rights.

So, welcome to my web says the spider to the fly (so to speak!), and PETA sends them a letter saying, we will give you the property for free — it’s worth it to us if that means that chickens stop feeling the KFC pain on the way to the KFC plate.   Of course the company ran as fast as they could and said something lame, like that they don’t deal with “corporate terrorists” — catchy, huh?

But, can you just imagine the huge, whooping GRIN on the organizer, Matt Prescott’s face, when he got the call from the PETA Foundation that some yahoo from Yum had just offered them a cool mil for the warehouse they own over in Norfolk?  This was an organizer’s moment unlike many that you will ever see again.

Here’s to you, Matt, for having one of those LUCKY days that organizers almost NEVER get to see! 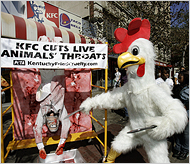 Timothy A. Clary/Agence France-Presse — Getty Images
People for the Ethical Treatment of Animals says its members have staged thousands of demonstrations outside KFC restaurants, often dressed in chicken costumes covered with blood