Nairobi            I spent some time with the labor folks, who were fairly well organized and much better represented than usual at these events.  No small reason may have been the clear leadership of the activities in the ‘Decent Work’ tent by the French CCT delegates and several of the global union groups.  They were kicking off a campaign at the World Social Forum on the 3rd day of the WST for Fair Play in 2010.

I didn’t realize in the beginning, but certainly got it by the time the march rolled out, that the World Cup is being held in South Africa in 2010, so the Fair Play campaign was an effort to force $1 Billion USD in construction costs for 10 stadia and another more than $1 Billion USD to be build to union standards and union wages.  More than one speaker quoted some famous football (that’s what they call soccer) coach approvingly as saying that ‘football (read soccer) was socialism without the politics.’  They all hooted and hollered at that every time it was repeated.  It was a labor crowd without a doubt.

This was a serious rollout.  The well respected President of COSATU (the Congress of South African Trade Unions) Willie Madisha was present and opened the session with a serious and sober outline of what they hoped to achieve, so from the beginning anyone under the tent knew this was serious business in South Africa.  It was an important and serious panel.

What surprised me though was the sense that they were starting from scratch on this campaign.  There was no mention and absolutely no recognition of the fact that a similar campaign had been fought–and largely won–in Atlanta when the Olympics came there.  There has been quite an effort being made in Vancouver to prepare for the Winter Olympics along the same lines.  Given the horsepower and capacity being put together for all of these efforts and the amount of campaigning and experience, it was unsettling to listen to all of this for hours as if the wheel was being reinvented for the first time to engage a major sporting event.

Yet that was exactly what was happening.  The head of the global federation helping coordinate the event before presiding over the ceremonial joint pact with all of the construction unions committing to the 2010 Fair Play campaign even reported on the debate of her leadership and the decision that they needed to go after the work at sporting events, as if it were a high risk, first of a kind deal.

These are fights that we have won and can keep winning, but not if we do not learn from each successive battle! 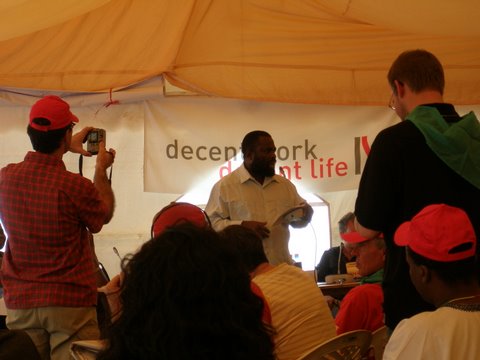 Head of COSATU speaking on the campaign
Symbol of campaign 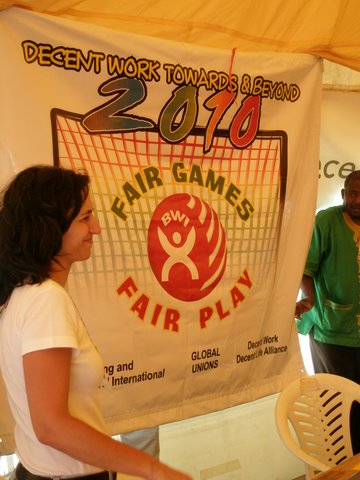