Buenos Aires ACORN’s India FDI Watch Campaign moved to a fever pitch this week with press conferences, meetings, and rallies in Mumbai, Bangalore, and Delhi to protest with scores of our allies among the parties, traders, unions, hawkers, and shopkeepers, the 24-hour India visit of Michael Duke of Wal-Mart with Bharti to discuss the terms of their widely reported, but unconsummated, joint venture which would allow Wal-Mart to establish a backdoor presence in this huge market. The campaign and the hostility to the company got press from all quarters, but by far and away, my favorite headline was the “Writing on the Wal, Not Everyone Likes the Mart” that ran in the Hindustan Times.

There was also press on the BBC in the UK, NPR radio in the US, Sky TV for the UK, and of course papers all over the three cities and nationally. When Sonia Ghandi, head of the Congress Party, recently publicly was at odds with her own government and questioned any agreement that would allow Wal-Mart to sneak into the country, our whole campaign gained a huge dose of legitimacy.

This is a breakthrough for the work led by ACORN’s India FDI Watch Campaign Director, Reena Desai, and her excellent team of organizers in India. The full flavor of all of the press can be appreciated by going to www.indiafdiwatch.org.

Importantly, Duke in this visit actually had to draw back from the commitments reported earlier because of the political and public storm. What originally had been billed as a “signing ceremony” of the joint venture instead became a milquetoast discussion with many around different tables about terms that still appeared uncertain and nebulous by the partners? In fact Bharti recently trumpeted its own Billion dollar investment plans in expanding retail and indicated that Wal-Mart’s contribution was more in the supply and distribution side. Huh? That’s not a partnership? It’s a subcontract or consultancy.

They are feeling the heat! 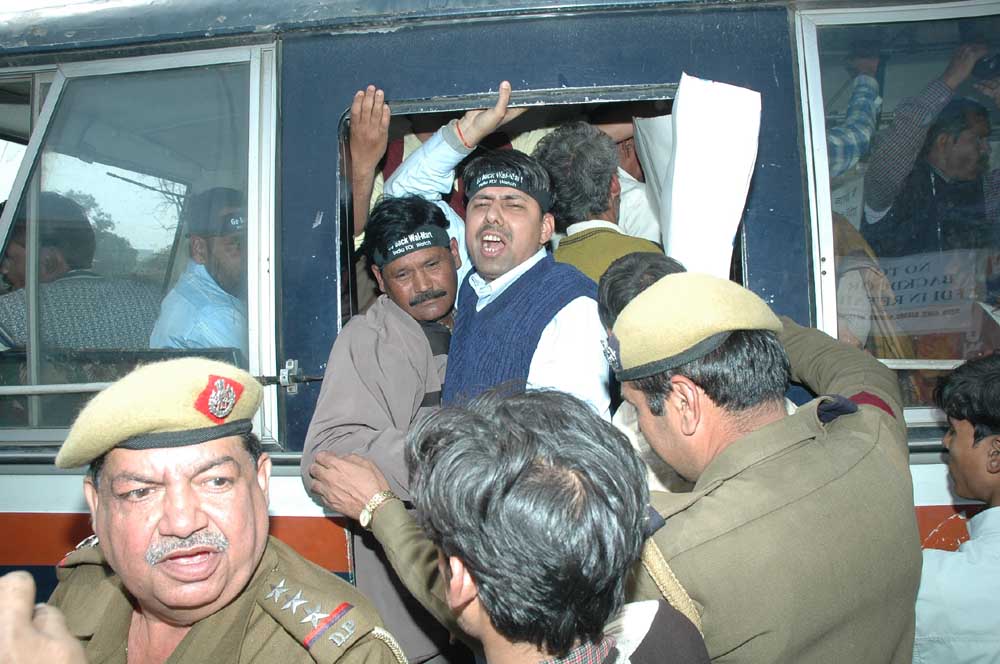 Dharmendra Kumar, our ACORN India FDI Watch organizer in Delhi, being arrested at the Wal-Mart demonstration