Buenos Aires Even 5000 miles away one could sense the excitement from all the reports of the celebration on Delery Street of the completion of the first two houses to be built in the Lower 9th Ward of New Orleans since the storm. It was a three-ring circus of ACORN members, scads of press, the homeowners (Ms. Butler and Ms. Guice), the construction crews and volunteers, bankers and dignitaries, and of course members of Congress like the House Subcommittee Chair, Maxine Waters (who presented the homeowners with their new keys!), Al Green, our great friend from Houston, Bill Jefferson, New Orleans own embattled representative, and many others.

Beth Butler, ACORN’s Mid-South Director, shared with me within minutes though how moved everyone was by some comments made at the dedication by Richard Ford, frequent New Orleans resident, Pulitzer Prize winner, and one of the clearest and most insightful voices of post-war American fiction. Our paths had crossed recently as Richard returned to New Orleans from his own post-Katrina exile, and wanted to help do something to rebuild the city in his own quiet, behind the scenes way. He ended up as a frequent volunteer carpenter, painter, and jack of some trades on the Delery Street houses in the final weeks of construction. In some ways Richard speaks for thousands and thousands of volunteers who have helped not only in New Orleans but in a hundreds of other ACORN projects. He just does so more eloquently and powerfully, not just as a welcome, but also as a challenge to many — to all of us — to continue and renew our efforts to rebuild this great city and do what needs to be done, wherever it has to be done.

I reached out for Richard and asked if I could have a copy of his remarks and share them. He generously agreed. His brief remarks follow:

I suppose I represent the volunteers, who have been fortunate enough to take a part — even a small part — in this hopeful and valiant house-raising. We’re — any of us — fortunate when we’re allowed to help someone else. And that should be an infectious spirit, especially in this city, that prides itself on its close communities and on its specialness, its compassion and wide understanding. I’ve certainly found a wonderful spirit here, in this unique project, in the days I’ve had a part of things — with David and James and Cecil and Lee, all my fellow workers. We’re all proud to have been a part of these houses’ lives. We’ve all learned important things.

I want to just say this to Ms. Butler and Ms. Guice. There’s a lot of cheap talk we hear every day about whether this community will come back, can come back, should be allowed to come back. But if it’s going to come back, that will depend a lot less on politicians’ talk, or land developers’ greedy plans, or on “the economy” (whatever that means); and instead it will depend on people like you two, who let their feet and their hearts and their determination do their talking, and who know that “community” is not just a word on a sign.
And I hope you both thrive here. I know you have a real pioneer spirit, as well as an abiding love for your friends and neighbors who’re absent now, but who want to return just as you have wanted to return, and now have. Life will be new and unusual here, and on some days challenging and maybe even scary. But I hope it teaches you something wonderful and renewing, shows you new and good things about yourselves, things you couldn’t have learned any other way but by being here on Delery Street. I admire you more than I can say.

Thanks, Richard!
ps. New Orleans is off the radar for many people, but this work is critical and on-going. Your interst — and support — is important. Don’t hesitate to donate now at www.acorn.org/donate. 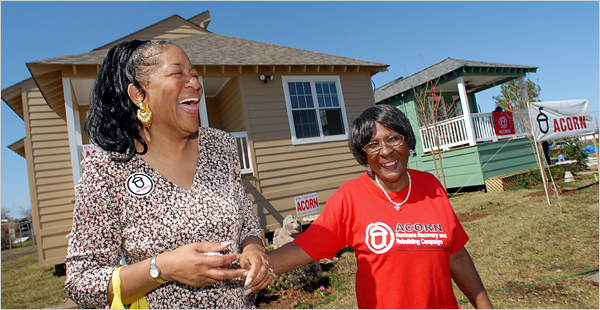 Josephine Butler and Gwendolyn Guice in front of their new homes. From the NY Times story, Friday, February 23.
Richard Ford