New Orleans I took a redeye from Buenos Aires to New York City last Friday night in order to fulfill a commitment to an old friend to be part of a conversation between some organizers and some mega-dome scholars and thinkers about social movements and the power of disruption and contention in creating social change. Hey, all in a day’s work, eh?

In the afternoon someone proposed talking for a minute about the “problem” of the current Iraq War the lack of an anti-war movement mobilizing on a mass basis to stop the war, even tough it is roundly condemned by virtually one and all from Main Street to Capital Hill. There was an interesting point that the scholars seemed to quote as gospel about anti-war movements never ending wars. I’ve thought about that point for days now since the meeting. As mass evidence of withdrawal of public support for government policies, I’ve always believed anti-war movements were critical, based on my own experience in the Viet Nam era, but maybe I’ve been superficial in my thinking?

Anyway, why is there not a larger, more vocal, more visible, anti-war movement that is in fact pushing and exerting pressure and forcing movement from power?

Some argued, though unconvincingly, that there was a movement, but the premise of the arguments rested on seeing some activity and activists on somewhat small scales in local settings as indicative of a movement. If they are right — and wouldn’t that be wonderful — it must be nascent. There’s nothing rivaling what we have seen in the past operating now.

It is fascinating to me when forced to think about it on a freezing Saturday in New York City, how much Bush and Chaney have gotten away with this despite the huge blundering. 3000+ deaths have not “brought the war home” in the way of Viet Nam and the draft. Some made the excellent point that the maiming from Iraq meant more terrible injuries and fewer deaths, but that doesn’t make a movement even among soldiers’ families, since they almost universally feel blessed that they are caring for a child, even badly hurt, rather than mourning at a grave. Their feelings are thankful still more than angry.

The size of the US economy also means that we don’t overheat and inflate as we did in Viet Nam or earlier wars. We are spending 100’s of billions of dollars, and business is unaffected, greed rules the day, and Iraq is virtually collateral damage for the economy and a side bar concern. Isn’t that wild?

We can be turning an entire country and a part of the world literally upside down, and on a daily basis, it still remains something on TV, affecting very few, and those too much.

How does one stop a war that never comes home? This is a fundamental organizing problem for a new generation of organizers. 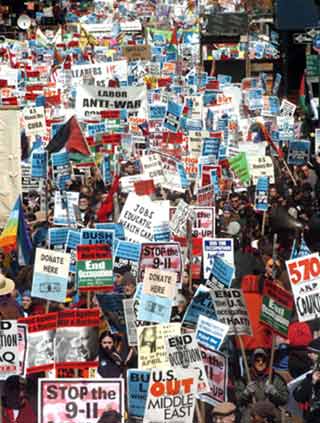 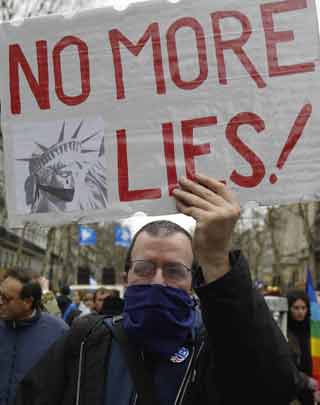