New York City The Management Council of the ACORN family of organizations was having our spring meeting (though given the freezing temperatures maybe we should rename the season!) in New York as we usually do. For many years we have enjoyed the hospitality of Bob Masters and the CWA in their conference room, but as the size of the council has increased, it has become a little cramped. This year we met in lower Broadway on the 6th floor of the United Federation of Teachers, the flagship AFT local of more than 100,000 members that has been not only one of our best allies in New York, but also our partner in organizing home child care workers over the last several years.

UFT’s dynamic and thoughtful president, Randi Weingarten, who is a rising power in institutional labor and obviously one of the key women in leadership ranks, came and spoke to the ACORN Management Council briefly. Given the current fight in Congress and labor’s recent success in getting the so-called Free Choice bill through the House of Representatives last week, her remarks on that subject were particularly apt. As is well known, the bill would follow the Canadian model and allow recognition without election based on the showing of signed employee authorizations or “card check” as labor organizers call the procedure.

Randi made the point in her remarks to us that her core concern was less about elections or card checks, and in fact she said that she often believed practically that elections were superior because they gave the union essentially more moral authority and weight at the table and in public. On the ACORN-UFT child care partnership, we have definitely always been in favor of an election on the giant unit in New York State for exactly those reasons. With more than 30000 members that would be added to the UFT, it simply has more external legitimacy in leveraging the Governor when the time comes, and internally is easier for the rest of the membership in the public sector to understand.

Randi believed that the issue before us in organizing now is real protection against retaliation for workers in organizing. Time and time again she believed that we have seen that the toothlessness of the law in both the private and public sector convince workers that the real life risks are greater than any possible reward thereby making organizing the pursuit of the desperate rather than the entitlement of the working class in general.

With the average of 1 1/2 to 2 workers fired per organizing drive in the private sector, Sister Weingarten makes an excellent point here. Although she did not argue this to us, perhaps she is right to advocate within the house of labor that we should focus more on protection and let the questions of elections settle themselves later. Something to thing about as we ponder the split branches of government and the art of the possible. 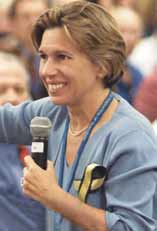