Nairobi What an exciting time to follow breakthroughs in the United States!

Today, there was a turning point in our organizing partnership with the United Federation of Teachers, when Governor Spitzer signed the executive order giving bargaining rights to 55,000 home day care workers marking a turning point after an extensive organizing campaign over the last two years. Yeah!

Yesterday, the lead editorial in the New York Times noted that in the US Attorney firing scandal with the Department of Justice there were blatant political motivations and machinations behind the indictment of four voter registration workers connected to ACORN in Kansas City right before the election. Duh?

Paul Satriano sent me a report on the signing of the most progressive anti-predatory lending bill in the United States this week in Minnesota after an extensive campaign and lobbying effort there.

The work goes on without skipping a beat! 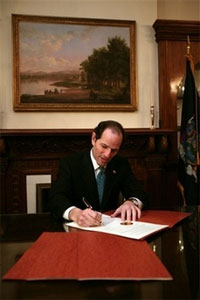