London    Flew the long way to save some dollars from Nairobi, flying more than 3 hours to Johannesburg and then almost 11 hours to London.  Couple more days and another trip will be over but for the mop-up, but there are some notes that need to still be sorted through in coming weeks.

One has to do with an article in the recent issue of the Atlantic magazine that took a hard look at the claims of the Milennium Project to end poverty being promoted in constant books and speeches by Dr. Jeffrey Sachs of the Earth Institute based at Columbia University in New York City.  Dr. Sachs has become quite influential and well-known for his promotion of an economic formula to essentially end poverty, which comes to an expenditure of about (I’m simplifying here obviously) $110 USD per person to break the cycle.  One of the big demonstrations projects seeking to prove that this can be done is in the upcountry, rural community of Sauri in Kenya.

Essentially, the Atlantic piece eviscerated the claims of the project and made it seem somewhat next to snake oil sales.  Sachs came off as slick salesman who was clueless about what was really happening on the ground.  He was lucky.  The agronomist, Sanchez, working for Earth Institute, came off as mindless, inept, and possibly deceitful despite his MacArthur Foundation award and world-wide reputation.  Some of the “donors” came off as shallow and culturally confused, damning themselves repeatedly through their own words.  No doubt they all regret ever having allowed the reporter to be a part of this trip!  Equally obvious, given the fact that the trip occurred in January 2006, way more than a year ago, there has obviously been quite an editorial struggle, I would bet, with Sachs and his supporters trying to kill the piece or modify it, which might be why there is so much age on it.

When I hit these long flights, I have a stack of all the magazines that have built up and are finally ready for reading.  My Atlantic for May was not in yet.  Mark though had read the article on his trip from the west coast, so he as pushing it into my hands from the first moment I saw him.  Not surprisingly, Cheryl Boetje also brought up the article at the end of our trip (and in the “how small is the world” category it did turn out that she and her associate were literally sitting behind me on the incoming flight from Amsterdam to Nairobi!).  She made the point that Sachs might have been protected if he had understood community organizations like ACORN and had had us on the ground to make sure that “people were involved.”  Mark had Sachs’ book on ending poverty with him and we looked back at the chapter on Sauri, so we could double-check the Atlantic claims.   Ironically, in the second part of the same chapter was a story about slums in Mumbai and the work of a community-based organization where Sachs in fact was clearly recognizing the importance of community organizing in making all of this work without fully absorbing, unfortunately, the full implications of how it might have prevented him from looking like the emperor with no clothes here.

In full disclosure one of our partners in the rebuilding of the 9th ward in New Orleans is the Earth Institute, particularly the team of Columbia students, headed up by Professor Rebeka Green.  Right after the storm others from the Earth Institute worked with us to determine the environmental damage from flooding to our neighborhoods.  I have been working with Rebeka to arrange to meet with Sachs and argue the success of the New Orleans model as a “demonstration project” for their global work.  Problem has been the intersection between his time in New York City and mine.  Perhaps this Atlantic problem will make it easier to meet and see what happens.  Perhaps it will make it harder.

The problem in some ways (and we will deal with this same phenomena in coming days around micro-lending) is the classic policy and programmatic dilemma that “you have to have a horse to beat a horse.”  By which I mean that — to Sachs’ complete credit! — he has managed to come up with a plan and is moving the resources behind it.  That there may be flaws, shortfalls, or even, God forbid, flim-flam (which is not my view of this situation incidentally!), but anyone who is willing to forcefully advocate for the end to world poverty and move people from Bono to Angelina Jolie to the United Nations behind him has got the inside track until a stronger, better, or faster horse comes up that can trounce this situation.

We’re knocking on the door, but we are long way from breaking through.  I hope that pieces like the Altantic story help people of good will and intention to simply learn that you have to keep close to the ground and align plans with results. It is always going to be the case that “pride cometh before a fall” and sales, promotion, and fulfillment are always challenges.

Regardless, just as we believe that Kibera residents could organizationally build enough power to finally solve this “intractable” problem, we also believe that collective efforts could in fact end poverty, rather than simply keeping the situation as the case where “the poor will always be among us.”

We won’t be lining up to stone Sachs and snicker at his media problems particularly as long as no one else is stepping out, putting up, and making something happen here! 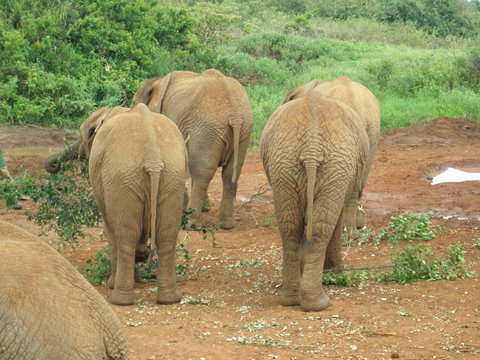 a herd of elephants from David Sheldrick Elephant Orphanage in Nairobi