London I spent a day on the underground crisscrossing the downtown from several UK union offices to campaign offices for critical international NGO’s to private foundations that set the standard for international funding to left-leaning publishing houses. I took more than one shower in the intermittent rain from dawn until dusk, when the sun finally broke through the clouds. I thought this was probably a classic day in London, but later found that this was yet another example of climate change. Seemed that it had been dry earlier in the month and was wet now for no reason. Seems I can’t even get my urban stereotypes in synch.

I called my day on the tube successful in the sense that I made every appointment on time or early, save one which I missed the bell by less than 10 minutes. Nonetheless, it was an interesting day in every way because it was an orientation to a foreign culture and situation, even though I thought I understood the language, the accents and terms were often totally foreign to me.

Immigration is an issue here I gathered, both between the lines from the labor brothers as well as reading London’s Mayor Ken Livingston talking about the fact that the Polish could build London for all he cared, since they had better work habits than the native born. Of course the Polish are now “migrant” workers since they have European Union citizenship and can move to the work. There are also some 500,000 or more “undocumented” immigrants that pose a different problem on this “migrant” issue and its impact on wages.

Prime Minister Blair is enormously unpopular I gathered, and the foreign experiences in Iraq as well as the “new” Labour Party program generally seem to have been his undoing. UNISON shared with me some good news in the passage of a national “minimum wage,” which is about 5 pounds 50 pence or so, which would be around $13.00 USD per hour. That’s something there for sure! Would Gordon Brown be much different? Not much according to my sources. The papers were full of headlines about Brown promising construction of 100,000 new “green” houses to meet affordability demands from working families. They called them “eco-villages.” Brown was quoted in a more conservative paper calling for a reduction in the pay for doctors of the National Health Service. There was a bitter battle for deputy party leader under Brown between a labor union stalwart (the only candidate personally attacked by Blair) and a host of others fighting for the soul of the Party. Labor has been without a union shop or compulsory dues system for 26 years since the Thatcher government, but it was unclear to me whether or not this was a Brown promise or not, and it was definitely not something that Blair delivered over 10 years of his ministry, which reminded me of the lack of labor law reform and the difficulty in getting a minimum wage increase in 8 years of President Clinton.

Grant Williams, a former ACORN organizer and someone “secunded” as they call it here over to the UK to work with partner unions on organizing, shared with me the different response an “action” has in London. One was that the press, even for a small event, is HUGE! They simply are not used to much in the way of this kind of citizen and/or worker-based demonstrations. Another lesson was more sobering, because the authorities, like the police or in-building security, are not accustomed to the way “actions” worked; thus, the response is immediate and physical it seems, with a quick ticket to jail! Grant shared with me an action at Goldman-Sachs here that ended up breaking the campaign to organize their cleaners, but virtually pulled all of their people into the stocks. Wild!

In the constant run around I was caught between meetings across from the fairly new (at least to me!) famous British Library. What a beautiful building! I went inside and there were clear windows of books and reading rooms everywhere in public and private. There was a free look at sacred texts from Islam, Christianity, and Judaism that dated back literally thousands of years. Some were exquisitely beautiful in terms of the marginal art and the calligraphy from all of the religions. There were texts of 2nd century authors who had written “gospels” that didn’t make it to the King James’ Version of the Bible. There were other efforts in early texts to merge all 4 gospels into one book. Who knew? This was a repository of culture at the highest level.

On about the 3rd floor there was even a slice of irony. An artist from south India was displayed across the landing. He had conflated Indian symbols and sensibilities onto the canvass of classic, English aristocratic portrait painting. I thought I was going to laugh out loud and both the humor and the profundity of the work, but instead I walked down into the rain to walk quickly through the wet streets on London on my appointed rounds. 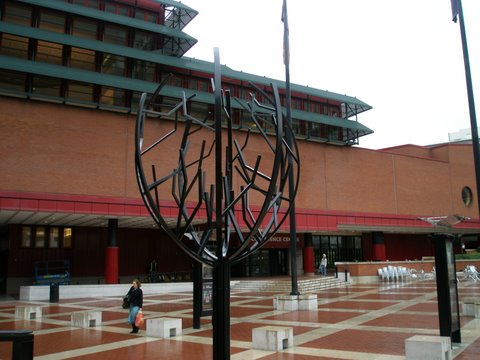 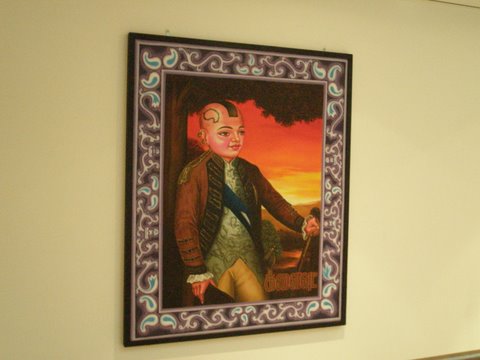 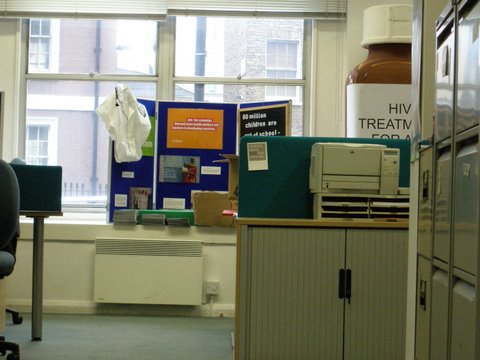