St. Petersburg        I ran into Chris Allemano at a Thai restaurant near our new WARN office in St. Pete on MLK in the shadow of the Tropicana Stadium.  Incidentally we stopped another Wal-Mart superstore yesterday, ho-hum–(http://www.warnwalmart.org/). Chris is a big ACORN supporter, great friend, and as it happens a lawyer.  She asked me as she customarily does how New Orleans was recovering from Katrina and after listening to my desultory response said that the big Katrina news in St. Pete had been the dogfights.  Huh?!?

Seems that in the big dog pickup after the storm, a certain number of dogs had been moved from the Katrina recovery zone by the SPCA and others to cities around the south and after a short time put up for adoption.  In the spirit of the times many people did their part and took the dogs in after the storm.  All good so far it would seem…

In some wonderful cases once the family was able to reassemble and get back on their feet, they were also able to track their dog down to put the last piece of their “family” together.  Some of these situations had occurred among the almost 300 odd dogs that ended up in this city.

But here is also where a feel-good story with a happy ending turns into a dogfight.  It seems it has not been uncommon that the original owner has ended up in a dogfight while trying to get their own dog back and some of these dogfights have ended in court with the constant coverage that has been the case several times in Tampa-St. Pete.

The most notorious case involved a multi-generational family, the Coutures, that had been flooded out of St. Bernard, just down river from New Orleans.  Stephen Couture had stayed with his dogs until having to run after the levee broke.  One of his family members turned the dogs into a shelter when he evacuated (dogs were not allowed to evacuate in many situations) under their family name.  Nonetheless their dogs were part of the 288 that ended up being transferred to the Pinellas SPCA and put up for adoption.  A prosecutor for the Hillsborough district attorney adopted the St. Bernard, having just lost her own.  Her roommate ended up with the other dog.  The Coutures eventually tracked their dogs down to the Tampa area, and then the adopters refused to return the dogs, and the fight was on!  The Couture’s had to file suit to get back their dogs.  The lawyers hired even more lawyers to oppose them.  When does all of this stop?

The issue, explained clearly by Chris, was whether a dog was a kind of “person” under the law, like a child, in which case the court would have to decide where the best home could be provided (and the Floridians wanted to argue that you don’t even let dogs back in Louisiana!), or whether a dog is personal property in which case it is not “finders keepers,” but important to give back what belongs to someone else.  Unknown to me (I can’t believe this has not been big New Orleans news!) legislators and others have gotten involved, passed laws and resolutions, while People, CNN, and others have fanned the flames.

At the end of the day “personal property” won, as it usually does, and after stonewalling until two weeks before the trial was set, the lawyers finally settled and agreed to give the dogs back to the Coutures.  They negotiated a deal where they all made nice in front of the reporters, and the lawyer offered to pay for medical care for the St. Bernard and in exchange won regular visitation rights — I’m not kidding.

The end of the story has everyone reunited, except that the Coutures are still not able to actually live in St. Bernard, that’s over for them, but they have managed to find a place in Louisiana, which I guess is the best that they can hope for now. 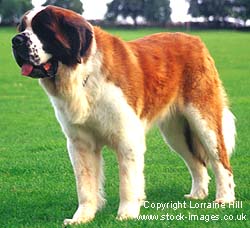