New Orleans ACORN has been hammering away at non-profit, tax exempt hospitals for years about the level of charity care that they are providing, as well as their tactics in trying to collect money from the unfortunate families needing their help by using liens on their property and all kinds of tactics as if they were mafia enforcers only interested in their vig. These hospitals, many of which are associated with religious institutions, say one thing while doing another, and frankly ought to be ashamed of themselves.

The IRS issued a report last week indicating that tax-exempt hospitals are spending less than 3% of total revenues on care for the poor and others who don’t pay. That’s an important distinction, as the ACORN campaign in many cities has argued, since often hospitals are taking credit for charity by reassigning their uncollectable debts for care. Brothers and sisters, we should never confuse simple accounting for charity!

All of this adds up. In Illinois and Texas standardized reporting is now being mandated, and according to the Wall Street Journal a study by Minnesota’s health department found that tax-exempt hospitals in that state “absorbed” (accounting and charity) $145 million in charity care and unpaid bills, but “received $444 million of tax and other benefits.” Seems like that would be $300 million that the poor of Minnesota could have used for a whole lot better health care!

Illinois Attorney General Lisa Madigan, who is a bright shining light among the state AG’s, has suggested that tax exempt hospitals spend at least 8% of operating costs on charity care to receive tax breaks. She caught a firestorm and stood down, but we hope that was just for regrouping.

Senator Chuck Grassley (R-Iowa) waves a big stick on the Senate Finance Committee, as the former Chair, and he has wondered out loud, “how much public service” tax-exempts are offering when they are sitting on “big cash reserves.” We often don’t agree with Senator Grassley, particularly when he is waving that stick recklessly as he did to protect the voter suppression efforts of the Republican Party last fall until the Department of Justice scandalous handling of US Attorney terminations for partisan reasons was exposed fully.

But, in this case we have to give him his due. Grassley has suggested that charity care should count for 5% of operating revenues in order to qualify for tax exemptions. He also has outlined governance changes that would limit outsiders and physicians from some of hospital boards if they want to protect their tax-exempt status.

This has been going on too long, and there has to be an exchange of care for the poor in order to receive the benefits. Looking the other way has benefited no one. We have to agree with Madigan, Grassley, and others: it’s time to straighten this mess out. 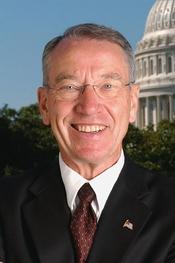