Washington The Wall Street Journal claimed that the market and Wal-Mart’s stock rose on the news that Wal-Mart and Bharti had finally inked their joint venture deal for Wal-Mart to expand into India. Mainly, this should only be proof in the irrationality of investors, since this transaction now seems more like minimal face-saving than any real deal. Let’s look at the steak rather than the sizzle.

First, it’s small potatoes. Bharti Wal-Mart indicates that they plan to not open a first store for another year and only intend to open “15 stores over the next 7 years employing about 5000 people.” Wal-Mart didn’t open India, they just opened Maine.

Second, this is venture is all “cash-and-carry,” which means that it is a wholesale operation selling to other retailers. Wal-Mart is providing the back end of this operation. There are indications that Bharti Retail may also be supplied by the joint venture.

If the Journal read their own stories, they would know that this news all represents a series of huge setbacks for Wal-Mart. Here are the facts and some conclusions one can draw from them:

* Wal-Mart did not need a joint venture to do cash-and-carry. Had they been willing to settle for that, they could have followed the lead of Metro, the German retailer, and opened this line of business years ago. This venture is a fig leaf buying some experience in the hope that foreign direct investment rules are eased in the future.

* The widely reported signing of the venture with Bharti had been held up for months (first indicates that a deal was in the making was announced 8 months ago!) and the reports most recently indicated that the deal breaking issue was whether or not Wal-Mart’s name would be on the stores and whether or not Wal-Mart could go on its own if FDI were relaxed. The indication that the retail outlet will be Bharti Retail puts to rest the question of co-branding with Wal-Mart and the tiny size of this venture along with the lack of co-branding now seems to indicate that this is a placeholder in hopes of a better day some decade other than this one.

* The announcements from Tesco and Carrefour that they would not enter the market in India because they believed it was not legal to do so also seems to have indicated that the boldness of other announcements by Wal-Mart and Bharti only meant they were really nothing more than political trial balloons testing political waters. The venture partners obviously discovered in Delhi that the balloons were being sent crashing back to earth. They may have wanted to try, but realized that they could not get away with it.

The announcement was obviously timed to move out just before the Quit India rallies scheduled by India FDI Watch Campaign supported by ACORN for August 9th, but no matter what the Wal-Mart public relations department may have intended, this looks like a concession rather than a celebration.

This is a huge victory for the India FDI Watch Campaign and its many allies throughout the country. Now a real plan can be made to protect consumers, shopkeepers, traders, hawkers, and communities in India. 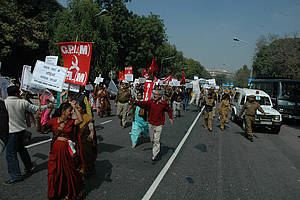 Protest against Wal-Mart in India