Houston        Over the last couple of days ACORN has released the data we found by combing through the information provided by banks throughout the country in 172 American cities under the Home Mortgage and Disclosure Act (HMDA).  Sobering and shocking!

Using data available through the annual Home Mortgage Disclosure Act (HMDA), “Foreclosure Exposure: A study of racial and income disparities in home mortgage lending in 172 American cities,” identifies communities likely to be hardest-hit as interest rates reset: Cities in the South (including four in Texas) and minority neighborhoods and households. African-American and Latino homeowners were found to be more than twice as likely to hold a high-cost, subprime loan than were white homeowners. Many borrowers could have qualified for more affordable, fixed-rate loans, but were unscrupulously guided toward more expensive products.

“These high-cost loans are leading more families to foreclosure and taking a tremendous toll on communities by decreasing property values and increasing crime,” said ACORN President Maude Hurd. “These are not risky people, but risky loans, and we must stop the lenders from steering hard-working Americans into products that they ultimately cannot afford.”

Southern cities face especially dire circumstances. The 10 metropolitan areas found to be at the highest risk nationwide are: Memphis, Tenn.; Birmingham, Ala.; Jackson, Miss.; McAllen, El Paso, Brownsville and Laredo, Texas; Springfield, Ill.; and Flint and Detroit, Mich. Data showed that high-cost subprime loans accounted for more than two-fifths of all loans issued in those cities.

ACORN is calling on lenders and servicers to modify loans to make them more affordable, and on state and federal governments to pass strong laws against predatory lending without pre-empting local legislation already in place. 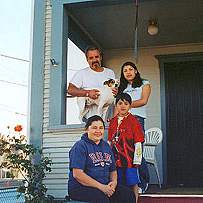