Stockholm         I had already finished one interesting meeting with Svalorna Latinamerika, an NGO that worked only in Peru, Bolivia, and Nicaragua. I knew I was working my way down the chain when they started asking whether or not I had any ideas for how they could build capital for business schemes in Ariquippa, Peru! Worse, I found myself telling them about a meeting that Judy Duncan and I had done with Scotiabank and suggesting they hit them hard for Ariquippa, just as we were going to do for Lima. It was clearly almost time to leave Sweden!

I was looking for the Food International Action Network (FIAN) located somewhere in the same building. This was a smaller, campaign-based organization that was an affiliate of a 20-year-old group with a Secretariat in Heidelberg, Germany that was working in a number of countries. The young woman had been very solicitous about the fact that it would be hard for me to find the building or their office, and she would be looking for me. I had managed to catch a ride from the Program Director of my morning meeting, a very interesting guy who had also lived and worked in Peru, and was also the Deputy Director of a children’s relief organization called Plan Sweden (in English). Their offices had been in an old factory space and were huge and gorgeous in almost a parody of Swedish taste, sort of “office by Ikea.” He had been liberal with his time (and generous with his car!) and had also given me a gift when we were talking about organizing informal workers in Latin America by telling me about an organization of child workers in Lima, called N.A.T.S. from the Spanish, Ninos Association Trabajadores and then something….Fascinating!

Anyway, I was looking for the FIAN office. I had seen a sign on a window, but was having trouble finding the door. A woman in the cobbled driveway of sorts was waiting for a cab and saw me trying to open the door. She started speaking to me quickly in Swedish, so finally I said, “I only speak English.” She said no problem and asked if I was here for the “celebration.” I said, “What celebration?” It turned out that this grey- haired and grey-bearded crowd coming into the library of the building was there to celebrate the 25th anniversary of their youth, when they had squatted this building and forced the “Muni,” as she called the City, to turn it over as office space for community and other non-profits. Part of the building dated back to 1600, and the extension was almost like a utilitarian Swedish version of a double wide trailer added on to it. From the back courtyard you could see the sign for Solidarity House, written in Swedish on the side of the building.

Walking through the crowd to find Lena of FIAN, the milling crowd looked me in the eyes carefully with open smiles. They were trying to remember if I had been one of them 25 years ago, just changed with my Astro’s baseball cap and ACORN polartecs so that they didn’t recognize me at first, but many were clearly almost ready with the slightest provocation to extend a heart handshake or offer a soulful hug. We had been together in the struggle when we were young, and somehow we had won! They smiled in a way that was unusual in Stockholm. For a minute there was real solidarity. I was one of them, and they were with me all the way. The simple fact that their struggle had been in Stockholm and ours in America should not really have mattered on this day. There did not need to be any excuse to celebrate solidarity and a peoples’ victory, and I was glad to be a part of it for a minute! 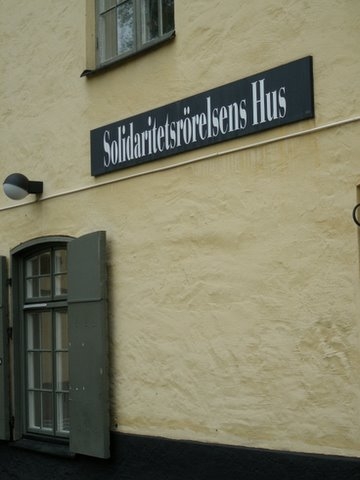 Outside the building
Office space of Plan Sweden 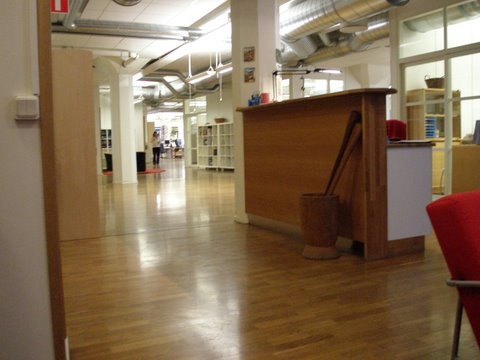 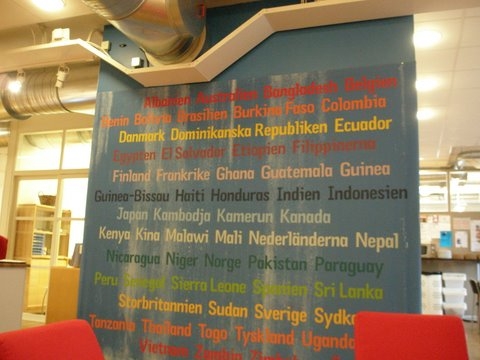