Stockholm        The cab driver in Oslo had said that Stockholm was prettier because Norway and Finland were colonies and the castles for the rich and royals were in Sweden and Denmark, since they were the overlords.   An interesting and troubling perspective in many ways to my mind, but gradually I found Stockholm on a grander scale.  Running in the pre-dawn a different direction on my second day, I crossed a small bridge and found myself in “Old Town,” as I later found it called, a village of shops and houses rising on a hill on a small island along narrow cobbled streets until running down to the water on the other side.  I could see the driver’s point perhaps.  As she had said, “It isn’t Prague or Paris, but it’s not Oslo either!” This morning I found my way over another bridge and ran a number of kilometers along the river and back which was certainly pleasant and picturesque.  Fall is coming harder here now and the temperature is dropping.  It is time to head south with the swallows again.

This is an expensive city!  Like San Francisco or Seattle or New York, this is an “executive” city.  I met no one on subway, tram, bus, or even car that did not have a 30 to 60 hour commute each way to work.  The commuting is not cheap either!  40 krones for a one way subway ride is about $5.50 USD — a long way from less than 40 cents for the subte in Buenos Aires!  I just bought a couple of “one off” t-shirts for my oldest, and I am in denial about the price, but I think I may have just bought the most expensive t-shirts in the world!

I asked a lot of people I met with what it cost them for housing, and it was startling.   One housing finance expert told me that what he paid for a 3-bedroom house an hour commute away would be the annual payment for an apartment in the central part of the city.  These are Manhattan rents.

Meanwhile many of the people I was meeting were in the grips of huge re-writes on proposals to the SIDA, the Swedish Development Agency.  Most of them move money largely from that source.  The new government in Sweden is a moderate right outfit, which is novel here after so many years of Social Democrat rule; it seems people were tired of it.  Even a “right” government in Sweden would pass for progressive in the US, but let’s not go there.  Anyway, as one informant told me, to the surprise of the people, the government is in fact implement exactly what it said it would do, like privatizing schools and pushing business receptivity.  The Swedish people are shocked to see it, and assumed the government would be mostly talk as usual, so the approval rate has sunk to 30% I am told or maybe it was that the Social Democrat approval rate is up to 70% again.  What this has meant to the development community is that they are now being required to come up with a 10% match in their own fundraising to meet the 90% contribution from SIDA, and many of them are in a crises not having been involved in fundraising much in the past.  I sometimes found myself giving a membership rap for them for their own use, regardless of whether or not they understood what ACORN was doing around the world.  The children’s and coop and labor based outfits with real constituency were the winners here, so to speak, since the more conservative government knew not to upset the applecart, but the “lazy and self-contented,” as one fellow called some of the other NGO’s were in deep straits.

The Scandinavian model “welfare” state has much to say for itself.  Marcus told me in Norway there was a study that estimated that each individual had a net worth held by the government at something like 350,000 krones at retirement, which is some real money (over $100K USD, I think — help me out kind “comment-ers”).  But, this is also not a deep-freeze heaven from what I also heard.  The increasing diversity, particularly in Sweden had let to a lot of racism and concern about xenophobic protection of the language and general chauvinism.  Others told me that it was virtually impossible for people over 40 and certainly over 50 to find a job because age discrimination was so intense.  People had better retire and take the government assistance because there was no room for them.  Ouch!  Interestingly, because the Social Democrats have held power so long, if you are a critic of the government for this or that, it is assumed that you are a right-winger because you just don’t knock the people in power.  Hmmm?!?

They are trying something different up here, and I hope they don’t lose the heart to continue to experiment with making it even better.  That is even harder sometimes! 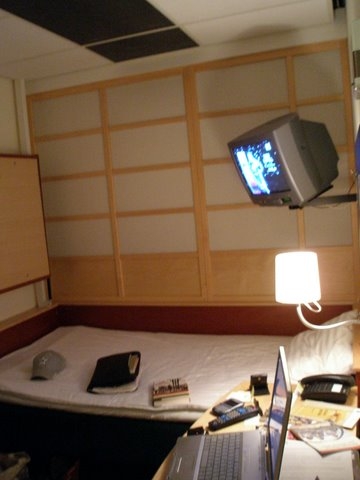 My little room over the bus station in Stockholm