Delhi         After almost two years of campaigning around the problems of foreign direct investment in India, the campaign has really taken off (www.indiafdiwatch.org), so I have flown to Delhi to meet with our staff and allies to look at where we are going from here with this effort. The timing was appropriate, since less than two weeks ago we spearheaded a protest in the streets of Mumbai that turned out more than 20,000 people in a massive out-pouring of opposition. The story in the Times of London recently gives a sense of the building pressure the campaign has generated.

More than 20,000 farmers and shopkeepers took to the streets of India’s commercial capital yesterday in the biggest public demonstrations against the market entry of foreign retailers.

The outburst in Bombay reflect a growing fear among India’s 12 million small store owners that their businesses will be destroyed by competition from giants such as Wal-Mart that are keen to break into a $330 billion (GBP162 billion) retail market forecast to double in size by 2015.

The world’s largest retailer has opened a cash-and-carry business with a local partner, Bharti Enterprises, but is not free to sell directly to Indian consumers because of a ban on foreign investment in the multibrand sector.

Activists claim that the move is a smokescreen to greater ambitions and that the US company will lobby hard for a change in legislation once it has a foothold.

They say that 40 million livelihoods are at stake.

“Wal-Mart got to where it is by squeezing the small guy,” said Vinod Shetty, a labour lawyer and a leader of the Quit Retail movement gathering pace across the country.

“What they want in India is a ready-made market but this is one business that Indian companies do know.

"We do not need to hand it over to them so they can wipe out the competition.”

It is not only foreign retailers that are feeling the heat — big Indian conglomerates with plans to open stores are facing similar opposition.

Reliance Retail, a subsidiary of Reliance Industries, run by India’s richest man, was forced last month to lay off 1,000 staff and close outlets after violent protests in northern and eastern India.

The adverse reaction has forced India’s biggest public company to rethink its $5.5 billion national rollout of a “farm to fork” food retail network.

In the most sensitive parts of the country, it may now refrain from selling fruit and vegetables.

Nearly all the big Indian industrial houses are proposing to run retail ventures.

Mahindra & Mahindra, the $4.5 billion tractor and technology group, joined the fray yesterday with a plan to sell toys and lifestyle products.

Amid the controversy, there is a fear among these groups that the protests could spiral out of control, particularly with opposition politicians fuelling the fires ahead of possible mid-term elections.

Some states are talking about banning modern retail outlets altogether.

“This is going to be a political strain for many years,” Wade Rathke, the founder of Acorn, a US community group helping the Indian campaign against Wal-Mart, said.

The uncertainty has kept other foreign retailers, such as Carrefour and Tesco, out of India where companies — or the so-called organised sector — still account for only 3 per cent of the market.

“In areas like software and engineering we need foreign investment, but retail is not rocket science,” Mahesh Kambli, the chief executive of the Apna Bazaar Co-operative, a chain selling food and medicines, said.

“If we let them in, the market will be run by a cartel of seven or eight retailers who five years down the line will get whatever price they ask for because there won’t be any competition left.” 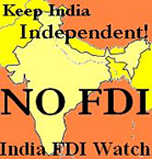