New Orleans         It is probably a little far out to say that Frank Stronach is the Donald Trump of Canada because that is a little unfair to Stronach, but in the sense that he may be the most famous and well-known businessman in Canada, even to the man-on-the-street, it gives you something to use as a frame of reference. Stronach is an Austrian immigrant to Canada who started Magna small and has directed its growth to become one of the biggest auto parts companies in the world. His daughter has been prominent in politics and government. He is clearly a character with a unique way of looking at business, the world, and his experience in both.

I had never heard of him until I got a call from Carol Phillips at the Canadian Auto Workers (CAW) asking what he was doing in Louisiana after Katrina. Tracking that story down for her gave me a sense of Stronach. In the wake of Katrina he had paid to evacuate more than 300 families to Florida and then re-established them in an area that came to be called “Canadaville” in Avoyelles Parish about an hour northwest of Baton Rouge. When Buzz Hargrove, the charismatic and controversial leader of CAW, visited New Orleans a year after Katrina and looked at the work being done by CAW members and ACORN in rebuilding houses, we all talked about Stronach and Magna.

So I was not surprised to read that the CAW and Magna had come to an understanding, but I was not prepared for the details in some ways, though I find this a very interesting, and, frankly, important development. For all of Stronach’s generally progressive, if eclectic, views, including on labor’s place at the table, the CAW had not been very successful in organizing his workers: only 3 of 43 plants in Canada were union. Magna and CAW made an agreement that Magna would support and encourage their 18,000 hourly employees to join the union in exchange for the CAW waiving the right-to-strike and the company agreeing to never lock-out the workers. The CAW now has to run a recruitment campaign to convince the Magna workers to sign up with the union, and I would imagine once signing up 55% or so, it will trigger a bargaining process for a legal agreement under Canadian labor laws. The wages are not the issues for Magna since it already pays at or above union scale. The issue on the table for the workers will be whether or not they want to be in the union to have a voice in the workplace and the protections of a grievance procedure. Despite any naysayer, that is vastly better than leaving them unorganized, and, even as Buzz says, will represent their own decision about joining or not joining.

Though there are fewer and fewer strikes and a continual debate on the effectiveness and future of the weapon, a deal like this is still outside of the comfort zone of most labor leaders because of its symbolism even more than its substance, so perhaps it takes a Buzz Hargrove kind of leader to make such a deal and have it work, just like it takes a very unique businessman like Stronach to understand that having a union and good labor relations makes Magna a better and more productive business.

As organized labor fades to irrelevance, we need more initiatives and experiments like this one in Canada that focus on the needs to build a majority union again. The first requirement always has to be getting people into the organization, and once that first step towards power is taken the future can only be better, even if unpredictable in every aspect.

The announcement indicates that Magna is interested in offering the same deal to the UAW in the States that could add another 18000 workers into the ranks of that union as well.

My email is here and my phone numbers are easily available. Anybody could call me with this kind of deal any day of the week, and we’re ready to talk and see what we can do! 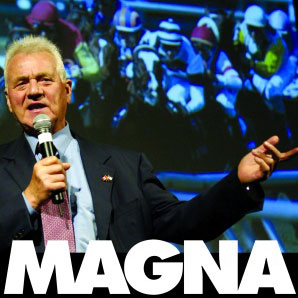