New Orleans      Professor john powell visited with our Year End / Year Begin meeting. This is a good friend of organizing and ACORN who I have gotten to know much better while we have been serving together on the Tides board. He is also just a heavyweight thinker and smart as a tack on questions of race and ethnicity.

He made our people think, and think well, so let me share some of this points with you:

* First, john pushed back on the tendency of too many progressives to want to choose to avoid issues of race by trying to substitute class as a more comfortable filter, even when ignoring the reality of race.

* There was a vivid reminder of how many of our institutions to this day are still seeped in racism dating to the slavery era in U.S. history. The story of the disproportionate voting weight given to states in the creation of the Electoral College was one unfamiliar to many — including me! It seems that though slaves were not given the vote, the founding white fathers did proportion a 3/5ths value in the population count to every slave in one of the states. This easily made Virginia the most populous state, and was pivotal in the Electoral College determination that made Thomas Jefferson president and impacted critically the elections for president in the first 30 odd years of the country.

The most powerful point he made was one he took from Professor Drew Weston at Emory University about political “frames” and how they impact on all of these issues, especially race. I listened to this closely because Drummond Pike from Tides had also quoted Weston two days earlier when visiting with me in New Orleans. Guy obviously has something to say to us these days.

Weston has looked at a lot of frames on whether are not they are “hope” or “fear” based in shaping perspectives that people bring to program, policy, and politics. The comparison to Bill Clinton’s successful message in running based on hope was telling, especially compared to the fear based (and losing!) approach that Kerry took along with most of the Republican candidates from Bush to Giuliani to an endless list.

Thinking about this later, it seems that people are also hope and fear based, and that says a lot about the ACORN “message” as well. One questioner asked john how ACORN should shape our “frame” in light of his remarks, and john recommended that we say that “ACORN is struggling to save the soul of America.”

Wow! To my mind it makes it worth our while to think about all of john’s insights and remarks. 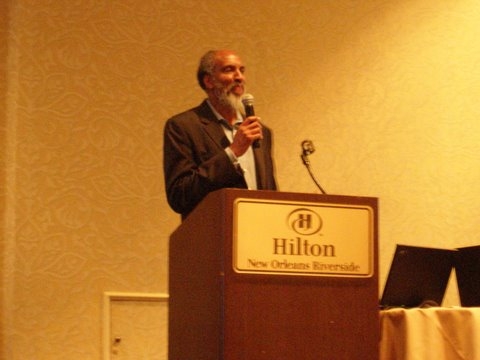