Lisbon        Thanks to the horrors of modern technology even on your vacation you can both get inquiries about what in the world is happening with the near riots at the New Orleans City Council where demonstrators were getting tasered and darned if you can’t read all about it, hour by hour, in your local newspaper even thousands of miles away.   Here are the bottom lines:

*    There is no local management of the Housing Authority of New Orleans (HANO).  HUD has been the sole trustee for the last 5 years or so.

*    Federal policy under both the Clinton and current Bush Administration has been to remove units of federal housing under various policy rationales.  Furthermore when implementing these teardowns and rebuilds, HUD has not been doing so at a 1:1 replacement ratio of new units built compared to units taken out of market.

*    More than a year ago Alphonse Jackson, HUD Secretary, announced that in New Orleans he intended to tear down the bulk of the existing projects and rebuild on about a 1:2 ratio of new to old units and furthermore make several of the projects mixed income.

*    Various lawyers sued on various grounds to block the demolition, reopen some of the units, and attempt to slow the project down.  Some of the suits were successful, some were not, but in the main, there were really no grounds to unravel a federal initiative long established.

*    The public sentiment against “concentration of poverty” even though analogous to the much maligned “people removal” policy of urban renewal in the 60’s also has gotten deep political traction.

*    In New Orleans where there had been 7000 units of public housing, only a little more than 5000 had been occupied before the storm.  Furthermore, between existing units that have been opened (over 1000) and housing vouchers, it was difficult to make a compelling case that there were public housing tenants being denied the right to return to New Orleans.

*    Public protests against the situation in public housing had become marginalized virtually “for the sake of protest” rather than in hopes of exerting pressure or leverage to alter the situation.  Furthermore, for unfathomable reasons there seemed little interest in broadening the protest or political coalition to include local organizations like ACORN.  The leadership and organizing behind most of the activities had become “activist” based and narrowly sectarian, and too often identified with people who had been thoroughly discredited for years and identified with vicious organizer and organization bashing.  In short not people who we could work with easily, if at all, nor where they people who wanted to work with us.  We had the irony of being solicited in places like Minneapolis to support the public housing protests, but not in New Orleans?!?

So, could something have been won around public housing in New Orleans?  Possibly, though it would have been extremely difficult in the best of circumstances, and these were not necessarily ideal.  Did those moving the local campaign really want to win or have a plan or proposal for victory?  It appears not.  It is difficult to move local politicians without local people for example.  Additionally, there seems not to have been all that much interest in building a mass-based campaign or mass-based support, making it difficult to move in that direction.

The end result meant that in Mayor Nagin’s statement they heard a “lot of pain” in the hearing, but the City Council voted 7-0 to demolition the units.  The vote definitely did not have to be that way, but by the time it came to this vote, perhaps there was some thinking by somebody somewhere that they simply wanted a clearer enemy rather than more units of housing.  What was won was won, and that’s about all there is to say at this point.

This is a fight waiting to be waged and won somewhere around the country, though not in New Orleans not at this time or in this way. 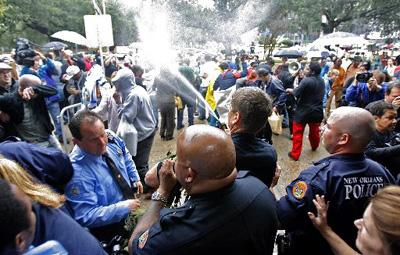