Lisbon        Part of my holiday reading has included Labor in the New Urban Battlegrounds:  Local Solidarity in a Global Economy edited by Lowell Turner and Daniel B. Cornfield and published this year (2007) by ILR/Cornell University Press.  The book was already worth my price of admission for introducing me to Sellers essay that included what I am taking for a snapshot of community organizing “density,” but there is more for those of us particularly interested in this nexus of community and labor collaboration.

There are pieces that interweave ACORN and our work as critical in these areas in the first three essays:

*    “The US Living Wage Movement:  Building Coalitions from the Local Level in a Global Economy” is a piece by our old friend and comrade, Stephanie Luce, from the University of Massachusetts at Amherst and the research center there.
*    “Organizing for Equitable Economic Development:  The Significance of Community Empowerment Organizations for Unions” by Ron Applegate was a surprisingly interesting essay that also firmly located ACORN and its work, including the understanding of the partnerships with labor evinced from our own experience with SEIU Locals 100 and 880 over the last 20+ years.
*    “Building Coalitions for Regional Power:  Labor’s Emerging Urban Strategy” was a survey of a number of local efforts of various kinds including Houston, Denver, and San Jose where ACORN is included and as interestingly Buffalo, Cleveland, Los Angeles, and Seattle where we are not, but also reflect David Reynolds work in looking deeply at all of these developments.

There are also interesting studies of Miami (by Bruce Nissen and Moncia Russo), San Jose, and Nashville.  In a weird slip of editing all mentions of ACORN end after the first part of the book, regardless of the fact that the organization shows up numerous times in these other essays.  There is a piece on the living wage campaign in London done by London Citizens that I have described earlier in these notes.

There was also a “makes you think” and “seems right” kind of reaction that resonated from an insightful comparison of Los Angeles and New York City in a piece called “Political Insiders and Social Activists” by Marco Hauptmeier and Lowell Turner that argues that the diametrically different way that power works in these two areas establishes the different contexts for organizational activity and collaboration.  In New York it is “who you know” while in Los Angeles it is “what you have” that makes a difference leading to the rise of social movements as required in Los Angeles in order to achieve power, while New York is moved more conservatively by the time tested and elaborate way that coalitions are constructed from established institutional, organizational, and political alignments.  Our own experience shadows much of this analysis.  The authors make another small point that one often forgets:  that the greater Los Angeles metropolitan area is in fact larger that the equivalent area in New York!

I don’t know that I could send you running to your local bookstore with your last dollar to get this book in the same way I was willing to recommend Marion Orr’s Transforming the City earlier this year, but I can tell you that you would not be wasting you money by adding this book to your organizing bookshelf. 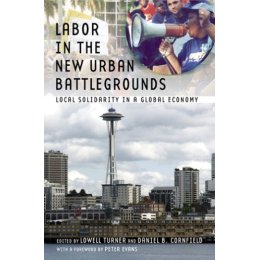