Lisbon        Two things came together that might be worth sharing.  One was the conclusions argued by Paul Collier in a book called The Bottom Billion:  Why the Poorest Countries are Failing and What Can be Done About It? and the other was a piece in the Times by Jason DeParle making a related case about migration of citizens from countries that are “poorer” to other countries that are slightly less poor in a phenomenon called “south to south” migration.

I finished the Collier book on my vacation recently.  He is a former World Bank research director on development.  His arguments can be boiled down simply.  He believes the poorest billion people in the world tend to come from countries that suffer from either one or a combination of “traps.”  He identifies four traps:  the conflict trap (having too many civil and other wars), the natural resource trap (having too few resources), being landlocked with bad neighbors, and having bad governance in a small country.

The problem of being landlocked with bad neighbors leaves no place for citizens to go and reap the supposed rewards of globalization spurring development back in their home country.  DeParle’s piece in the Times talks about this problem of migration and remittances being critical for survival regardless of development.

The piece also reflects the experience of our organizers with ACORN International and much of what we encounter not only among informal workers but also in many of the mega-slums where we organize.  We see the Nepalese and Bangladeshis in Delhi and elsewhere among the ragpickers.  In Buenos Aires we see the Bolivians and Peruvians in La Matanza.  In the Dominican Republic we hear the constant complaints about Haitians.  Anywhere there is a spread between wages and income in one country compared to another, there is a magnet drawing poor people into even a slightly richer area to do what others will not do as cheaply it seems.

The consequences are huge!  DeParle’s article states, “There are 74 million “south to south” migrants, according to the World Bank, which uses the term to describe anyone moving from one developing country to another, regardless of geography. The bank estimates that they send home $18 billion to $55 billion a year. (The bank also estimates that 82 million migrants have moved “south to north,” or from poor countries to rich ones.)”  How amazing?  There are almost as many migrants moving by hook or crook to the smallest differential as to the huge gains in the developed countries.

It seems like a lot of people are getting a better grip on the people and the problem without much commitment to any real solutions that I seem compelling. 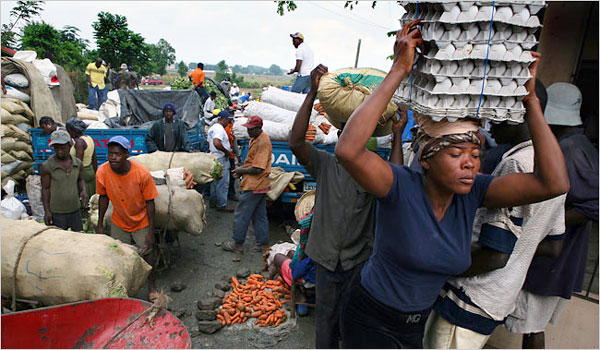