New Orleans        The corporate strategy lesson being taught over and over again during the last year or so in the implosion of mortgage based companies is that it is as important to know when to fold as it is to know when to bet.  Sometimes you simply do not have the cards, and have to take the loss, rather than thinking everything is going to remain static and that a miracle will save you.  The winners in this game are the ones who walk away from the burning house, rather than the ones that wait too long and watch the roof cave in on top of them.  In most of these cases we have been right there with one company after another trying to push for a better deal for the borrowers who were likely to be hurt on either side of this catastrophe.

We were there with New Century trying to pull a deal out last year right before the collapse and bankruptcy.  Failing to do so, we now are still trying to sort out a system with Carrington after they took over most of the servicing of the New Century portfolio.  New Century couldn’t find a buyer.  Same thing later in the year for WCC, owned by GE Money, who sat there and told us they were being bought within hours so no “adjustments” were necessary, and then we watched them slide into oblivion.  Luckily the servicing of their borrowers was with Litton, so we have chased them over there.  We were there with Option One owned by H&R Block as they touted their software and their systems and were close enough to see what happens as they tried to complete a sale with Cerberus that finally collapsed after many postponements and price adjustments that swept the CEO away at the same time in a board struggle.

Ameriquest and its alter ego Argent were on the other side of the bet.  The founder had already pulled out to be a Bush Ambassador to the Court of St. James in England and without remorse kept lowering the price until Citigroup bought what was left, so that they could walk away.  Meanwhile despite our relationships with Citi, we are still banging on them to do right on the Argent portfolio.

Countrywide is the latest example of the “bad boys” brigade that knows when to fold and over recent days took $4Billion in a fire sale from Bank of America rather than goes belly up and watch their credit lines disappear in the same way that New Century had collapsed.  Six months before the company had been valued at close to $30 Billion and about the same time took $2Billion in an investment with Bank of America and gave them a first option on any purchase.   Once again with have an entrepreneur/robber baron who had made a gazillion over 30 years with the company, but didn’t hesitate to pick up the phone in December and call Ken Lewis at Bank of America and say, essentially “don’t bring twenty, bring plenty,” and it’s yours.  At the price paid by Bank of America they can pull pennies out on the dollar almost from the huge $9 Million loan portfolio and still make their $6 Billion back it would seem.   Luckily in this case we have an agreement on “best servicing practices” including three month reviews so that we actually have borrower protections in writing and in hand (announcement rescheduled for this coming Thursday) as well as monitoring systems intact.  The analyst and Bank of America publicly agreed with us saying that the systems needed to be changed, but the people running them were decent, much as we had concluded.

Fortunately we moved quickly, though almost not quickly enough, or we might once again be sitting there looking at months of work with no protections for the borrowers or our members, rather than sitting where we are with a firm foundation that we can now continue to build on.   Just as CEO’s are probably learning to “fold faster” from the lessons of one big time CEO after another losing their jobs, ACORN is learning that we have to move quickly, nail it down as best we can with whomever we can, so that we can mark the line and keep moving to protect and advance our people.  Time is not on our side in this crisis, and if we hesitate, we are lost! 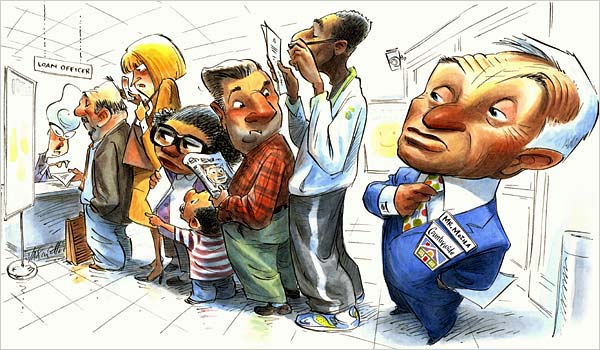