New Orleans      As hard as it is to imagine Drew, Mississippi, in the heart of the River delta at the core of Sunflower County only eight miles away from the notorious Parchman Prison, has had its moments in the sun recently. A couple of years ago there was a story about dying small towns in the rural South, and there were pictures of Drew and quotes from local residents in either the Washington Post or New York Times, now I’ve forgotten which one.

The pictures are dark. This is the rough time of year in Drew, when the Delta fields are all filled with winter fallow. The green is gone and the brown and gray are everywhere. There is a stark beauty to this time in the Delta, but it is not easy to embrace. As boys, we knew this time from Thanksgiving and Christmas visits to see our grandparents who lived there. We raked leaves for my grandmother, we ran around the huge yard, we walked the few blocks to the Main Street, had a cherry coke at the drugstore, visited a cousin’s house to play ping pong, picked up the mail at the post office where everyone knew our names as Ruth’s grandchildren or Sue’s nephews since they both worked there for years, we watched fresh sausage bought from the farms, or we helped with snapping beans in bowls on our laps, or we watched with wonder the green and red that were the only colors on our grandfather’s miracle TV set, or we threw a ball in the school yard, but mainly we visited old people and watched them buried, and listened to the discussion along the sedans and truck beds about change coming in the price of cotton and the advent of civil rights.

I called my mother early on Sunday morning to see if she had read the front page story in the Times-Picayune about Drew and seen the pictures of what it looked like now. Of course she had. Drew is in the news here not because it is my mother’s hometown, but because it was also the home of Archie Manning’s mother. For years anytime I drove through Drew to show my own children where some of their roots were planted, there had been a sign on the road saying, “Drew, Hometown of Archie Manning!” The sign had appeared after Archie had been a star of the Ole Miss Rebels football team in the late ’60’s, making them a contender and sometimes victor through his heroics in improbable games. I was surprised to read that the sign is now gone. But, most of Drew is gone, and has been gone for a long time.

The Manning boys, Peyton and Eli, were born and raised in New Orleans from the time Archie tried to carry the hapless Saints on the strength of his throwing arm. Peyton’s machine like efficiency brought the Indianapolis Colts a Super Bowl victory last year and now his younger brother, Eli, has surprisingly brought the New York Giants to the big game this year. All of this brings Drew back into the picture as people try to explain and make sense of the Manning football dynasty that has shaped itself into a position in the pros that the Kennedy and Bush outfits have in politics.

Archie graduated from Drew High School as my mother and his mother did before them around the same time I graduated from high school in New Orleans. He handles himself with grace in his comments in the paper about Drew. It paints a picture of an idyllic time then and presents Drew as a perfect picture of small town life and his raising. He talks about his mother with the affection that he carefully points out that everyone has about their mothers. My mother remembered the hours that Archie’s father, Buddy, and her father, Albert Wade Ratliff, would spend playing checkers when the work was slow at the furniture store that Buddy Manning managed.

The Drew I remember from that time was heavily divided by the civil rights movement and trying to understand the change swirling around them as the old and new both squeezed hard to find a place in the town in the shifting sands and sentiment. Sunflower was not just Manning country. It was also Fannie Lou Hamer country. It was Senator Eastland’s county. Archie’s class in Drew High School, just like mine in New Orleans was torn between school, jobs, and whether to go to war someplace in Southeast Asia that none of us could even imagine, but where we knew that the humidity was the only thing we might understand as boys from the southern Delta and swamps.

All of which explains why football is just a game and an escape from small southern towns allowing them to be painted with tinted memories that ignore the harsher realities and instead simply tally the score on Saturday and Sunday afternoons to keep from thinking about what happens the rest of the week. And, thanks to Drew, also explains why once the Saints have gone their way, it is a matter of habit, geography, and family pride that leaves us rooting for whatever New Orleans players are left in the game at this time of the year. I root for the Manning boys to have a good game, regardless of their teams and the outcome. I always hope the Manning boys still remind people that these were lives that mattered in many ways to many people even as a way of life perhaps deservedly disappears from America and the South. This year they are doing just that it seems.

If something makes my mother happy, that makes football still worth something even to me. 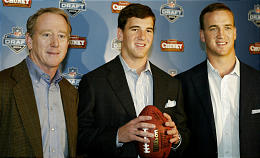